Sulfur Smell in Your Water

Does your water smell like rotten eggs? Does it leave a white, brown, black, or gray slime in your pipes and fixtures? Water that's high in sulfur often smells bad and leaves stains behind. Learn more about sulfur water problems from the water professionals at US Water Systems.

If you have sulfur water problems, you probably know it – even if you don't know the cause. Many people say that their water has a distinct "rotten egg" odor, which is the familiar sulfur smell. Technically, what you're smelling is hydrogen sulfide (H2S), a colorless gas that's dissolved in the water. You'll also likely see a white, grey, reddish brown, or black slime in your plumbing system or well; this can be caused by sulfur-oxidizing bacteria. This slime can promote the growth of other bacteria, such as iron bacteria, as well as causing black stains on silverware and plumbing fixtures, and even corrode pipes and other metal components.

Should I Be Worried about Sulfur in My Water?

Although hydrogen sulfide is a poisonous gas, the levels this type of sulfur in water are more of a nuisance than a health threat. When your water smells like sulfur, turning on the hot water for a shower or to wash dishes can release a burst of foul-smelling odor. Your water may also taste bitter or like rotten eggs, making it unpleasant to drink, and it can also affect the taste of foods cooked in it.

Some individuals find that a bigger worry about sulfur water is how it affects their plumbing systems. Hydrogen sulfide is corrosive, so it may discolor silverware and faucets, especially those containing copper, brass, steel, or iron. The slime caused by sulfur water can clog up your pipes and leave nasty stains in toilets and other fixtures. Sulfur also

Sulfur is considered a secondary or aesthetic contaminant. The present recommended limit for sulfur in water, 0.3 mg/l (ppm), is based on taste and appearance rather than on any detrimental health effect. Private water supplies are not subject to the rules, but the guidelines can be used to evaluate water quality. In rare cases, the presence of hydrogen sulfide can indicate that your water has been contaminated by sewage, so it's important to test your water regularly.

Why Is There Sulfur in My Water?

In many cases, the sulfur in water comes from the rocks and soil that groundwater moves through before it gets to your well. Sulfur is a naturally-occurring mineral that can easily be dissolved into water. In addition, certain sulfur bacteria can be in the groundwater, in the well, or in the water distribution system where they convert sulfates into hydrogen sulfide. This gas is also found naturally in groundwater in some places. 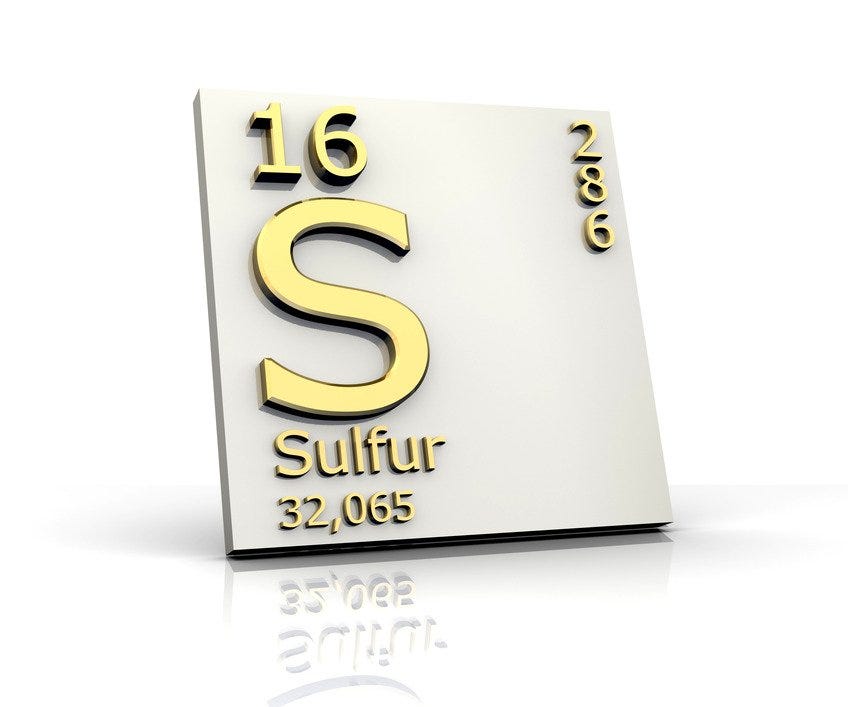 Do You Have a Sulfur Water Problem?

If you have detected a sulfur smell in your water, it's a good idea to have a good water analysis performed. This water test doesn't just detect sulfur in water, but can also detect a number of other contaminants, including hardness, pH, manganese, iron, and total dissolved solids (TDS). The inter-relationships of the different contaminates will help you to determine the best technology to solve your problem.

With a detailed laboratory analysis, US Water Systems will be able to confidently recommend the appropriate treatment and will provide a Performance Guarantee with the system. We stand behind our products with a money-back guarantee when we have a good water analysis of the water we are treating. If you purchase the recommended solution, you will receive a credit for the cost of your water analysis.

There are many ways to remove sulfur from water, and most operate on the principal of oxidizing the sulfur to change it from a gas to a solid or undissolved state. Once in the solid state, you can simply filter this contaminant out. Oxidizing filters are the most common method of sulfur water removal, but other common processes such as ozone, aeration, chlorine, or peroxide injection may be used to boost the oxidizing properties of the water being treated.

Special backwashing filters are the most widely used system for removing sulfur in water. These filters contain a special media, listed below, to turn the dissolved sulfur into solid particles and filter them out. It's important to note that The pH of the water plays an important role in how quickly sulfur in gas form converts to a solid state. The higher the pH, the faster sulfur will convert to the solid state that can then be filtered. This is a good thing for your equipment, with the exception of water softener – in these systems, the oxidized sulfur plugs the exchange sites and fouls the resin.

When using a sulfur filter, a pH above 6.5 is an absolute necessity, and in reality a pH above 7.0 is what is really needed. A pH of 8.0 to 8.5 greatly enhances the chance of a successful application. If you have acid water, you'll need to address this before you can remove the sulfur smell. If it is necessary to increase the pH level, a chemical feed of sodium carbonate or soda ash is preferred over a filter filled with calcium carbonate (calcite) or magnesium oxide (Corsex), as the filter method may foul quickly. Low pH levels are the chief reason for unsatisfactory results when using an oxidizing filter.

What follows is a partial list of medias used in sulfur water filtration. We do not attempt to address all medias, especially ones which are dubious in design or outdated.

At US Water Systems, we believe that the above methods of sulfur removal are less than satisfactory in most cases. Below, we list several additional methods of oxidation and filtration, including our recommended system type.

Hydrogen peroxide is not a hazardous chemical – to the contrary, hydrogen peroxide or H2O2, is composed of the elements of water: hydrogen and oxygen. There is nothing foreign or chemical added to the water supply. Unlike chlorine, hydrogen peroxide requires no contact time and the reaction or oxidation of sulfur, iron, rust, manganese, and hydrogen sulfide is immediate. A quality hydrogen peroxide system is the answer to practically any sulfur water problem. With hydrogen peroxide, you can always predict for a certainty that it will work, even with excessive amounts of sulfur (or iron).

Ozone is a powerful oxidizer and, when used properly, it can be effective on large amounts of sulfur. Ozone is injected into the water via a contact vessel as a pre-treatment to filtration. A properly sized ozone generator and proper system design is the key to success. Due to ozone's expense, it is usually applied on sulfur levels higher than other methods of filtration can handle effectively. Each system is custom designed for the application, and ozone systems typically cost three or four times more than other methods – it does have a very minimal operating cost, however. If you are considering the use of ozone for sulfur water treatment, please call one of our ozone specialists at 1-800-608-USWA or e-mail us at support@uswatersystems.com.

Chlorine is a powerful oxidizer, so it's not uncommon to use 5% to 10% chlorine to treat high sulfur water. Chlorination requires a contact tank, however, which should have a 20 minute supply of water at peak flow. For instance, if the peak flow is 10 gallons per minute, then a 200 gallon contact tank would be needed. Many chlorination systems are undersized in respect to the contact tank, and meet with mixed results. After the injection of the chlorine and flow into the contact tank, a backwashing carbon filter is needed to remove the precipitated sulfur and residual chlorine. Chlorine works well as a disinfectant, but it is not a good oxidizer for this purpose, and it can only remove a small amounts of sulfur. At US Water, we do not recommend chlorination for the removal of sulfur.

Air injection has become a popular way of oxidizing iron, manganese, and sulfur in water. A variety of methods are used to inject air into the water supply, including air pumps and compressors, which are highly problematic (not to mention noisy). Of course, air has a lot of oxygen, which is an excellent oxidizer of sulfur (as well as iron and manganese). Many companies are now using a water softener control valve to pull in air instead of drawing brine, introducing a head of air into the tank. The oxygen oxidizes the sulfur and iron, and it is filtered out by the special catalytic media in the filter. However, the downside to using air injection to treat sulfur water is that the injectors often plug and fail to operate.