Manganese and Iron in Water

If there is iron in your water, you probably know it! Iron can cause rusty water, which leaves black, orange, or red stains on your plumbing fixtures, toilets, and other surfaces. This mineral can also give you water that tastes like metal. And when you have iron, you can typically have manganese in the water as well. Manganese is more difficult to remove from the water and it leaves brown or black stains. Neither iron nor manganese is desirable in your water and US Water Systems can eradicate both iron and manganese completely. The US Water OXi-Gen System is the most robust one on the market.

Our Synergy Twin-Alternating Water Softener is also a great choice on water that has smaller amounts of iron or manganese in it. The best scenario is to filter the water with an OXi System, followed by the Synergy (if the water contains hardness as well). The Synergy regenerates with soft water and fills the brine tank with soft water and is exceptional at removing manganese in the water. It is vitally important that a Comprehensive Lab Water Test is performed on your water before attempting to remove iron or manganese. Then it is a great idea to talk to one of our Certified Water Specialists or Master Water Specialists as to what is best for you. Call us at 800-608-8792 to learn more 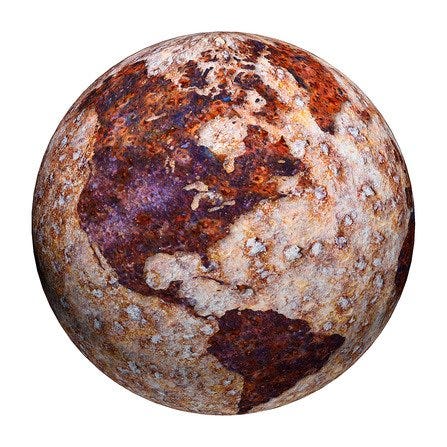 PROBLEMS WITH IRON IN WATER?

When you have high levels of iron in your water, you will likely know it from the black or red stains left by this mineral. These stains not only accumulate on toilets and showers, iron can discolor your clothing and anything else that untreated water touches. Iron is often found with manganese, another mineral that leaves black or dark brown stains and which can build up deposits in your pipes. Water with high levels of iron and manganese most often comes from wells or other private water sources.

It is common for water that contains iron to also have levels of hydrogen sulfide and/or arsenic. In many cases, all of these contaminants can be removed in exactly the same manner that you remove iron.

HOW DOES IRON GET IN MY WATER?

Iron in water typically comes from the rocks and soil around the water source. As water moves through the rocks and into the well or aquafer, it dissolves the iron that's naturally found in the environment. Manganese is often found in the same sources as iron, although it's less common.

There are many types of iron, but for our purposes we generally divided them into two main categories: (1) soluble or ferrous iron and (2) insoluble or ferric iron. Soluble iron, or "clear water" iron oxidizes to insoluble or red iron in the presence of oxygen either in the well or in your home. You can tell if you have soluble iron in water by pouring a glass of cold clear water. When allowed to stand in the presence of air, reddish brown particles will appear in the glass and eventually settle to the bottom. When insoluble iron, or red water iron, is poured into a glass, it appears rusty or has a red or yellow color. Insoluble iron can create serious taste and appearance problems in water.

ARE IRON AND MANGANESE IN WATER DANGEROUS?

In most cases, the amount of iron in water from a well is more of a nuisance rather than a health risk. Most people don't like it when water tastes like metal or has a red or brown tinge. Since both iron and manganese can stain plumbing fixtures, laundry, and other items, it can ruin clothing and leave sinks and tubs looking dirty, even when they aren't. Very high levels of manganese in water can cause neurological symptoms.

Another reason that you might want to treat high iron water is that certain types of bacteria need it to survive. These bacteria can form an unpleasant yellow or brown slime in your plumbing, and often produce a bad odor. Although they are not particularly dangerous, most people prefer to get rid of these bacteria.

TESTING FOR IRON IN WATER

If you're concerned about iron or manganese in your water, it is imperative that you perform a good water analysis. This type of water testing is not just for iron and manganese, but includes a number of other contaminants, like hardness, pH, nitrate, tannin, sulfur, TDS, and more. The inter-relationships of the different competing contaminants will help in choosing the best technology to solve your specific iron, manganese, sulfur and/or arsenic problem.

Once you've had a good water analysis, US Water will be able to confidently recommend the appropriate treatment and will provide a Performance Guarantee with the system you choose. There are several different methods for removing iron, sulfur, arsenic, and manganese from the water, and most operate on the principal of oxidizing the iron to convert it from a ferrous (dissolved or soluble) to a ferric or undissolved state. Once it is converted to the ferric state, iron can be filtered out. US Water Systems has more than 220 years of experience in using iron and manganese water filters successfully all over the country. You have come to the right place if you want to solve your problem once and for all!

In instances where the iron in water is high and the pH is low (below 5.8), a Synergy Twin-Alternating Water Softener can be used to remove some iron and manganese. This method often only has a limited impact, however, especially if your pH is neutral or higher. In most cases, iron and manganese need to be oxidized to be removed. Other contaminants, like sulfur, will not be removed by a water softener. In practically every case, the Synergy is a great idea after the iron and manganese are reduced or removed by the OXi-Gen System.

Over 20 years ago, we begin experimenting with introducing air (which is 21% oxygen) into a backwashing tank of catalytic carbon based media as a way to treat iron and manganese in drinking water. We did this with a water softener valve that was modified to suck in air instead of salt brine. While we do not claim to be the first to do this, there weren't many other companies that we were aware of who were. Others have used air pumps, air injectors, and micronizers, all of which added 21% oxygen to the system.

Oxygen is an excellent oxidizer of iron, sulfur, and manganese and recently, US Water introduced the next generation in its line of oxygen systems called the inFusion Chemical-Free Iron and Sulfur Eradication System. It is built on a commercial water softener platform with a 1" high flow (up to 20 GPM) control valve that draws in oxygen from the air to oxidize the iron and sulfur. It does not use the typical manganese dioxide media, but rather uses the lighter and much more effective catalytic carbon, which acts as a catalyst between the oxygen and the iron and sulfur. So, if you have really moderate iron or manganese or sulfur in your water, this chemical free method will handle about any level thrown at it. No chemicals, no high cost of operation, and no ozone “ just clean, fresh water!

At US Water, we no longer use medias that end in lox. It is our opinion that Katalox, Pyrolox, Filox and all the rest are best installed by a local deal who hopefully lives next door and has a key to your house, because he is going to be there a lot. While these medias do work in some cases, we do not believe they are reliable and the results are unpredictable. If you have one that works¦ great! We like to be able to GUARANTEE results and the only way we can do that is with the OXi-Gen System.