A naturally occurring element, arsenic and its compounds are very poisonous. If you get your water from a private well, it's important to have your water tested regularly to make sure that it's safe to drink. Read on to learn more about the health risks of arsenic in water and the different methods available for treating contaminated water. 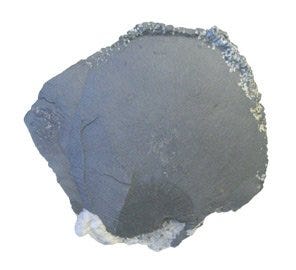 Arsenic is a metalloid element that is found naturally in rocks, soil, and plants. Most forms of this element are extremely toxic and dangerous to humans. The source of arsenic in water is often natural deposits in the ground that contaminate aquifers and wells. Contamination can also be caused by poor agricultural and industrial practices.

This element has a variety of industrial uses, and it's found in some paints and dyes, soaps, semiconductors, and in some metal alloys. Arsenic was a very common wood preservative used for decades in the United States, but it's no longer used to treat wood for household use. This element is also released into the environment through coal burning, mining operations, and copper smelting. In agriculture, arsenic can be found in some fertilizers, as well as a number of pesticides and herbicides.

What Are the Signs of Arsenic in Drinking Water?

Because arsenic has no taste, odor, or color, there really is no easy way to know if there is arsenic in drinking water. Anyone who gets their water from a well or other private source should make sure that the system is tested for arsenic regularly.

How Does Arsenic Get into Water?

As groundwater passes through rocks and soil that contain arsenic, this element can be dissolved into the water. In addition, arsenic used for industrial or agricultural purposes can contaminate drinking water supplies.

What Are the Health Risks?

Arsenic is poisonous, and drinking arsenic in water can be deadly. Exposure can cause headaches, drowsiness, diarrhea and vomiting, and discoloration of the skin and fingernails. Over time, chronic exposure may lead to severe stomach pain, numbness in the extremities, convulsions, paralysis, and blindness. Arsenic has also been linked to several different types of cancer.

It's important to note that while arsenic in drinking water is dangerous, it's not as much of a concern in water used for other purposes. Arsenic is not absorbed through the skin very easily, and it won't become airborne if it's dissolved in water. Unless levels are very high – more than 500 ppb – it's OK to use water that contains arsenic for bathing and other household chores.

When Should I Take Action?

Because arsenic is highly toxic, the maximum contaminant level (MCL) is .010 ppm or 10 ppb. This figure is based on both organic and inorganic forms.

More Information on Arsenic in Water 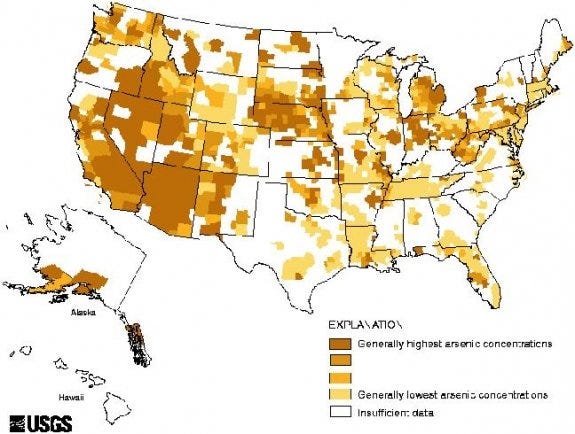 Arsenic is found naturally in the soil, so it's often found in higher levels in groundwater than in other water sources. When large amounts of water are removed from the ground through wells and municipal systems, the arsenic that's naturally held in rocks may be exposed and released. In other words, the more the water is used in locations with high arsenic deposits, the more likely it is to be contaminated. In the U.S., the Environmental Protection Agency has set the standard for arsenic in drinking water at 10 parts per billion (ppb).

Compared to the rest of the United States, the Western states tend to have the highest arsenic levels – often above the EPA's standard of 10 ppb. In addition, some parts of the Midwest and New England have high levels of arsenic in water, although most systems in these areas are under the EPA limit. Part of the reason why testing is so important is that "hot spots" can develop even where arsenic is not a common problem. If you're concerned about arsenic in your water, consult your local health department or your state geological survey office.

How To Remove Arsenic from Water

Depending upon what a detailed water analysis of your water reveals, there are multiple ways of removing arsenic from water supplies. One of the most effective and affordable arsenic water filter methods is reverse osmosis (RO), with studies indicating that it may be up to 95% effective. RO systems are typically only used to produce drinking water, although whole house systems are available. If there is also iron in the water, then there are special resin medias that will bind with the iron and arsenic and remove them from the water. Before any sizing or determination of system design can be started, however, a detailed water analysis must be completed.

If you need a detailed water analysis, check out our water testing kits or call a Certified Water Specialist at 1-800-608-8792.