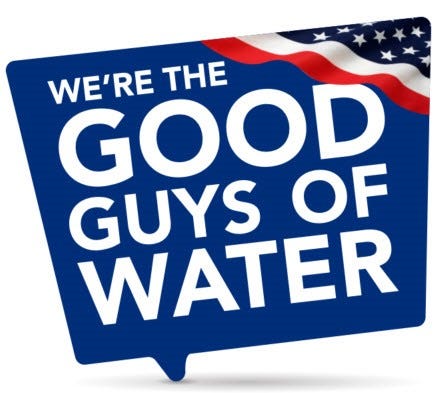 US Water Systems provides water softeners that are the most salt-efficient on the market and all of our water softeners are programmed via Bluetooth on you Smartphone. If you think that sounds too difficult, you would be mistaken. Programming with Bluetooth is so advanced, it's simple! You don’t have to consult a manual, just push the button and your softener becomes the time on your Smart Device. But, in case you are among the 10% of the population that does not have a Smart Device, then we do have buttons that are there for you. Our systems have the best warranties in the business – Up to 10 Years on the Valve and Electronics and Lifetime on the Tanks and Resin (We use 10% Cross-linked). We even offer a 1.25” Valve that has the highest flow in the business – 37 GPM! No one can build a better water softener than the Certified Water Specialists at US Water Systems and nobody comes close to our Legendary Technical Support after the sale – six days a week!

You can trust the experts at US Water Systems to provide you with a real water softener, you will love, not some salt-free fictional one that doesn't soften the water. With a water softener from US Water Systems, you will use up to 75% less soap, save up to 30% on water heating costs while protecting your plumbing and appliances. It will make your clothes whiter and brighter, and of course, it makes cleaning a breeze. You eliminate spots, streaks and scum on showers and fixtures as well, and one of the best parts is that you have spot-free dishes and silverware.

You know that price is important when you are shopping for a water softener, but even more important are four other factors:

Filter By
FILTER BY
Category
American Made
Yes
Manufacturer
Price

Which Water Softener is Right For You?

Picking out the perfect water softener can be a drag. Keep yourself from being weighted down and follow our advice - Pick the system that best fits you based on price point and features. Sure, you could go buy a cheap water softener for $600 or $700 and have to replace it every 1-3 years or you can invest in a system that will last you 20+ years. Take a look at our systems and you will see that we have something that fits your home, family, lifestyle and budget!

Premium quality at an affordable price. The Flexx Pro Series Water Softener sports a professional-grade, American-sourced construction, and design. The Flexx uses premium 8% cross-linked resin and is backed with our industry-leading warranty.

The Matrixx Water Softener features the industry-leading Vortech tank technology. This technology allows for significant increases in both softening and filtering capacities when compared to standard systems. With up to 70% savings on annual salt consumption and up to 40% less pressures drop, the Vortech tank is the most efficient tank on the market to date.

The next evolution of our best-selling Matrixx Water Softener - by combining the Matrixx with drop technology, we were able to create a system that goes beyond the capabilities of a typical water softener. The Matrixx Smart Water Softener is a true Whole House Water Management System. Smart device and Alexa ready - pair the hub to the softener and download the free app.

We spent years developing a family of salt-efficient water softeners that integrate seamlessly with our free smartphone app. Simply download the free Waterlogix companion app, pair the devices, and you’ll have access to a real-time dashboard and settings.

By buying American-made products, you help reduce your carbon footprint.

Our water softeners use up to 75% less salt per regeneration when compared to our leading competitors. Oh and soap? With properly softened water you'll need about 50% less when it comes to cleaning.

Best Warranty In The Business

The first and most important reason to use a home water softener is to remove the hardness minerals from your water. Hard water clogs the plumbing and any water-based application that relies on the plumbing. With soft water, you will no longer need to worry about rising energy bills because your appliances aren&rsquo;t working as well, or expensive repair costs. You will also benefit from longer-lasting clothing, detergents that work more effectively, and a clean feeling on your skin after a shower or bath.

What Are the Differences Between a Water Softener and a Water Conditioner?

Water softener systems work by removing hardness minerals and replacing them with sodium ions. Water conditioners are devices that help prevent the hardness-forming minerals from forming scale. They use a physical media to inhibit the scale from building up by neutralizing the hardness itself. Due to the fact that water conditioners use a physical media instead of a chemical media, they are sometimes considered a greener alternative in areas where it is forbidden to use salt. Water conditioners do not effectively remove hardness from the water supply, however, as the only way to do this is with salt-based media.

How Do Salt-Based Water Softeners Work?

Does Water Softening Actually Save Money on Energy?

The US Department of Energy says that "Water heating can account for 14%-25% of the energy consumed in your home." It is the second-highest energy-consuming area of a home, next to heating and cooling. The number of minerals dissolved in water can cause it to take longer for water to heat, increasing those energy costs. A study conducted in 2009 by the Water Quality Research Foundation in conjunction with the Battelle Memorial Institute, known as The Battelle Study, conducted tests to help determine how much energy savings a whole house water softener can provide homeowners. The results of that study indicate that untreated hard water added costs to water heating up to 48% in some cases. The Battelle Study also found hard water to rapidly lead to clogged showerheads, in some cases after as little as a year and a half of regular use. After just one week of constant testing with hard water, more than three-fourths of showerhead nozzles became clogged, according to laboratory results. Showerheads using water treated by a water softening system, meanwhile, performed nearly as well as on the day they were installed.

Does a Water Softener System Actually Save Money on Soaps and Detergents?

A second part of the Battelle Study compared detergent dose, water hardness, and washing temperature to see if hardness had an impact on detergent savings. The study included tests that removed difficult soils, in addition to evaluating spotting and filming. Researchers found that softened water uses almost 30% less detergent, but cleans as well as water at 10 gpg hardness level. That detergent savings rises to nearly 70% when comparing soft water with water at a 25 gpg level. Better performance and savings can be achieved with softened water, the reports authors concluded. Water treated with a water softener system might not only save consumers money but could also be environmentally friendly, because it helps cut back on harmful detergents going into water streams. In areas where there is very hard water, consumers can often cut detergent use in dishwashers and washing machines by more than 50% after softening and get the same results.

Many people are hesitant to use water softening systems because they may be under the impression that the equipment regenerates quite frequently and puts a high load of sodium salts into the wastewater. This, of course, is not true; the average family of four people would require whole house water softener regeneration approximately two or three times a week. The water quality improvement industry has earnestly sought to sort out the factual information on water softener system effluent. A recent septic tank study from the Water Quality Association clearly indicates that there are no adverse effects when water softening wastewater is discharged into properly installed private septic systems. There are several additional reports that also explain further evidence of the hardness ions in a softener's regeneration waste causing less clogging and maintaining higher permeability than the regular septic tank effluent.

WQA has research reports by the University of Wisconsin and the National Sanitation Foundation on septic tanks and water softeners. This research was completed in the late 1970's. It was about that time that numerous regulatory agencies were contemplating restriction on the discharge of water softener wastes to private sewage disposal systems. More recently the U.S. Environmental Protection Agency reviewed this research report, and an expert in on-site waste treatment wrote October 1993 that he "does not believe that the conclusions of the earlier study would change since the chemistry and physics of soils have not." He also goes on to say that he knows this work to remain "scientifically excellent." These studies conclusively show that water softener waste effluents cause no problems for septic tanks. The allowance of water treatment system discharges to hundreds of thousands of septic tank systems is practically universal now. It has not caused damage or hazards; but it has provided convenience and economic savings to many homeowners. This conclusion is supported by the Ten States? "Recommended Standards for Individual Sewage Systems" The states have concluded that even in Montmorillinite clay soils, "the disposal of brine wastes from water softening equipment does not have a significant effect upon the permeability of soils suitable for soil absorption systems."

The addition of sodium to a septic system by use of soft water actually has beneficial effects on the digestion of wastes by bacteria. The volume of wastes from water softeners (about 50 gallons per regeneration) are added to the septic tank slowly and are not of sufficient volume to cause any deleterious hydraulic load problems. In fact, they are lower in volume and rate of addition than wastes from automatic washers. And the calcium and magnesium in softener regeneration wastes contribute to good air and water movement (improved soil percolation) through the septic system drainage field.

The University of Wisconsin and the National Sanitation Foundation reports clearly indicate that when the sodium content from the softener regeneration cycle is discharged into the soil via a septic system along with other salts such as calcium, magnesium, and iron the result is an improvement in the soil's percolation rather than a detriment. The enclosed copy of a letter from Dr. Fred P. Miller, Professor of Soil Science, Department of Agronomy, University of Maryland, in which he evaluates this study clearly indicates this same conclusion. I specifically direct your attention to Dr. Miller's closing statements. Dr. Miller points out that when the septic system is receiving soft water only, containing a very low mineral content, and not receiving the mineral salts from the backwash cycle, this condition "might result in swelling and dispersion of clay and lowered hydraulic conductivity in the absorption field."

There are other advantages that are directly related to the use of ion exchange softened water when the hardness minerals calcium and magnesium are removed by softening. The homeowner uses less soap -- studies have indicated as much as 50% to 75% less. There is also less biodegradable products discharged into the system which relieves the loading on the system. It is a known fact that many homeowners do not maintain a septic system properly; not pumping the system at proper intervals allows detergent solids, as well as other solids, to be carried over into the drainage area causing clogging. Also, by having soft water or stain-free water available, the homeowner's fabrics are cleaner, and the amount of water used can be reduced. This reduces the loading on the septic system a great deal.

The water quality improvement industry has earnestly sought to sort out the factual information on softener effluent. The septic tank study clearly indicates that there are no adverse effects when water conditioning effluent is discharged into properly installed private septic systems. There are a few additional reports that also explain further evidence of the hardness ions in a softener?s regeneration wastes causing less clogging and maintaining higher permeability than the regular septic tank effluent. (TAKEN DIRECTLY FROM THE WEBSITE OF THE WATER QUALITY ASSOCIATION)