If you have ever poured a glass of water from the tap in your home only to find that it looks rusty, or that reddish-brown particles settle to the bottom, you likely have high levels of iron in your water. Iron leaves orange, black, or gray stains on your fixtures and clothing, and a metallic smell and taste in your water. Not only is this a nuisance, but iron can encourage the growth of certain types of harmful bacteria that leaves a nasty brown or yellow slime. The experienced team at US Water Systems can help you find an iron water filter to remove iron and other contaminants from water, eliminating the bad taste and smell and helping to prevent bacteria growth. 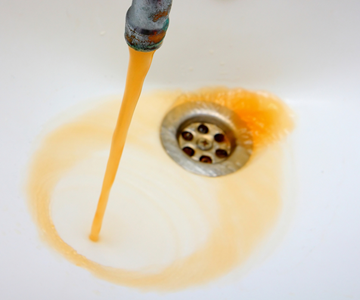 Water that is high in iron often also has elevated levels of manganese, hydrogen sulfide (often known simply as sulfur), and arsenic. A good iron water filter can usually also remove or sharply reduce these contaminants as well. A backwashing whole house iron water filter is one of the most common ways of treating water that’s high in this metal, and the right filter can be very effective.

Types of Iron in Water

Iron can be found in the water supply in two different forms: soluble or “ferrous” iron and insoluble or “ferric” iron. Soluble iron, which is iron that’s dissolved in the water, needs to be made insoluble so that it can be removed from the water. Fortunately, exposing the iron to oxygen causes it to change; unfortunately, when it becomes insoluble in your home, the iron will settle out and leave deposits in your pipes and water heater and on your clothing and dishes.

While it’s usually pretty easy to tell if you have iron in your water, it’s always a good idea to have your water tested to determine the iron levels, as well as to find out if there are additional contaminants in your water. All of our most popular water test kits test for iron, and we offer testing for iron and sulfur bacteria as well.

There are a number of different ways to remove iron and magnesium from your water supply, but at US Water Systems, we recommend two types of backwashing iron water filters: catalytic carbon filters combined with hydrogen peroxide oxidation and Katalox Light filters. Each type of system has its pros and cons, and our trusted Certified Water Specialists can help you to determine which system is right for your home. Call us at 1-800-608-8792 to discuss your water treatment needs. 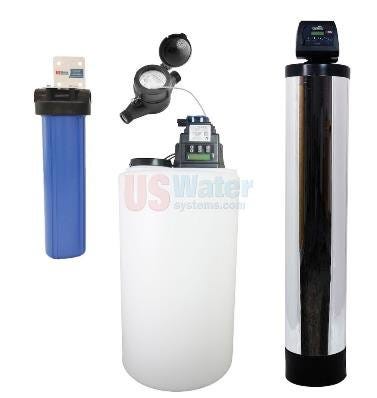 The whole house iron water filter that we recommend combines hydrogen peroxide oxidation with a catalytic carbon filter. Hydrogen peroxide is an extremely effective oxidizer, making the iron, manganese, and hydrogen sulfide in the water easier to remove. This type of filter works because when iron, manganese, and hydrogen sulfide are exposed to oxygen, they become insoluble – or solid – in the water. Once the contaminants are solid, they can be filtered out with a carbon filter. Catalytic carbon enhances the oxidation process, making it a good choice for use in an iron filter for water.

Oxidation followed by filtration is considered one of the most effective ways to remove high levels of iron. This type of system does require regular maintenance: the hydrogen peroxide tank needs to be refilled as it is used up, and the carbon filter media will require both periodic backwashing and eventual replacement after several years.

Iron can also effectively be removed using an oxidizing iron water filter that includes the Katalox Light media. Katalox Light is a filtering media with a very high surface area that filters down to 3 microns, which means that it can trap insoluble iron and manganese particles. This media also has a 10% manganese dioxide coating, higher than most other forms of oxidizing media. This high level of coating combined with the media’s light weight make it more effective and easier to backwash than other similar ion removal media types.

While a backwashing iron water filter is a common and effective way of treating water, there are other methods. Modern ozone systems – which typically include a backwashing filter as part of the design – work very well, but they are also quite expensive and often cost too much for the average homeowner. A water softener can also remove some iron and manganese, although it’s not as effective as other methods and may quickly foul the softener resin. Iron is sometimes treated with polyphosphate, but this treatment only prevents the iron from staining; it doesn’t remove it from the water and typically does not have any impact on manganese.