Deionization is a chemical process that uses specially manufactured ion-exchange resins that exchange hydrogen ions and hydroxide ions for dissolved minerals, which then recombine to form water. One of the most efficient ways to manage this process is with a DI cartridge, which contains one or two types of DI resins. As the water flows into the deionizer cartridge, the ions are exchanged and high purity water flows out. Because most non-particulate water impurities are dissolved salts, deionization produces a high purity water that is generally similar to distilled water, and this process is quick and without scale buildup.

Filter By
FILTER BY
American Made
Yes
Filter Size
2.5 x 10
2.5 x 20 (19.5)
4.5 x 20
Other Sizes
Filter Type
DI
Manufacturer
Compare Products
Compare
Clear All
You have no items to compare.
My Wish Lists
Last Added Items
Go to Wish List
You have no items in your wish list. 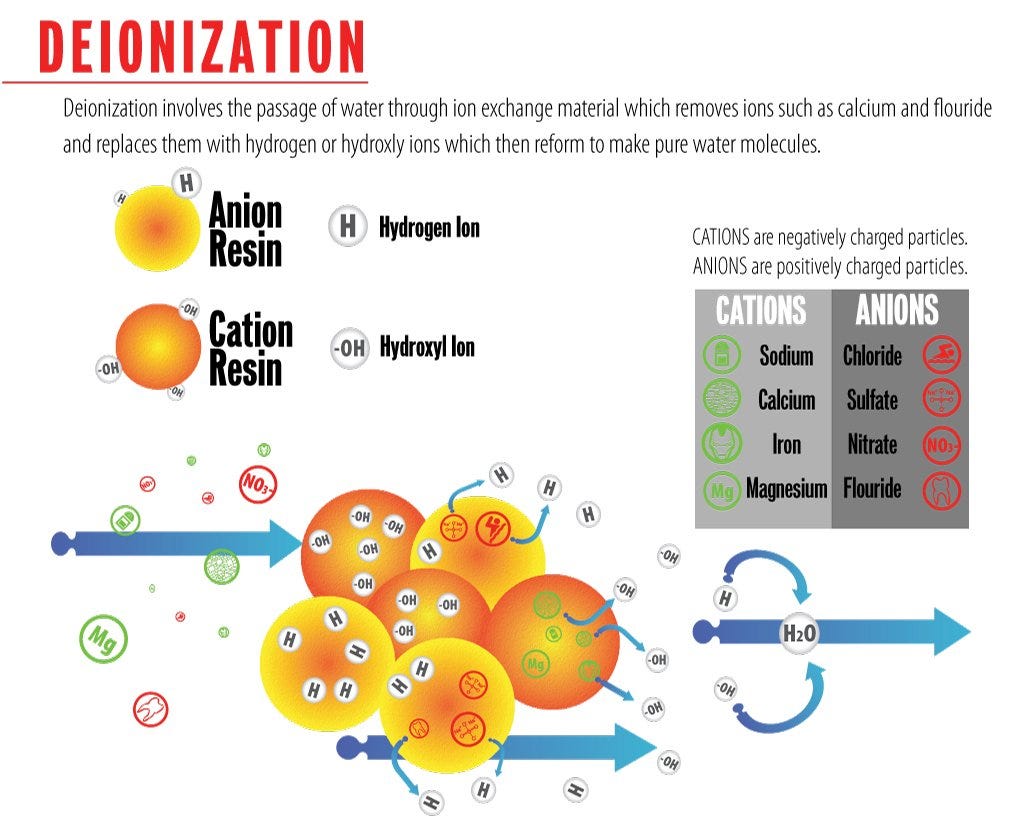 By definition, deionization, often called DI for short, is used in connection to the removal of ions from the water. Deionization is typically accomplished by passing water through two ion exchange columns, one positively charged and one negatively charged. The ions, which have positive or negative charges, are exchanged for H+ ions or OH- ions. The H+ ions react with the OH- ions, leaving no ions remaining in the solution. It's also possible to use a mixed bed of cation (negative) and anion (positive) exchange resins in a DI cartridge, simplifying the process of deionization.

To purify water with a DI cartridge system, water that has already been filtered to remove particulate matter (and, in many cases, which has already passed through a reverse osmosis system or filter) is piped into a standard filter housing. This housing typically contains two or more deionizer cartridges, and may also include additional filters as well. As the water flows into the cartridge, it passes through the mixed bed resin, which attracts nearly all of the mineral ions and replaces them with H+ and OH-. These new ions combine to form H20 or water. You're left with high purity water that can be used for a range of industrial purposes.

In addition to being simpler, it's more cost effective to purify water using DI cartridges in housings or pods. The regeneration process by which the mineral ions that have been removed from the water are cleaned out of the mixed resin beds so that the resin can be reused involves hydrochloric acid and liquid sodium hydroxide, both of which are potentially dangerous and must be disposed of properly. It is more affordable and practical to use a deionizer cartridge system, replacing the cartridges when they are exhausted and sending the old cartridges out to a bulk regeneration plant to have them regenerated and recycled.