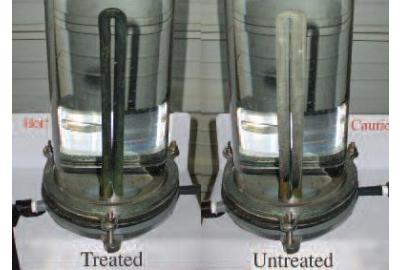 Posted in: Salt-Free Systems
By Mark Timmons
7 comments
More from this author

Back on the subject of salt-less water softeners or salt-free water conditioners, Rick Rhodes wrote:

Hmmm, here you say that the DVGW-512 standard is of no value, yet in 2007 you wrote: The German Technical and Scientific Association for Gas and Water (DVGW) has developed protocol for testing scale prevention properties of these types of devices. This testing protocol is called DVGW Standard W 512. In order to be certified by this agency, a device must reach the threshold of being at least 80% efficient. There are several devices throughout the world which are certified as being at least 80% efficient, but to my knowledge, there is only one such device in the USA that achieves this level of efficiency, that being nextScaleStop manufactured by next Filtration Technologies, Inc. of Incline Village, Nevada and that is the product we handle. We sell it under the brand name “Green Wave.” I suspect too many competitors met this standard in 2007-2010, so you decided it’s worthless. Too many witch doctors in this business for my taste. (puns intended)

The Water Doctor Replied: I have never been called a "witch doctor". That's pretty cool! Maybe it's my fault that I didn't go back and "edit" what I wrote in 2007, but I think it's good to see how things "evolve." This blog has spanned several years and technology always changes. Products change and companies change. During that time, I have gathered more knowledge, completed more scientific testing, launched investigations into many other products, and as a result, I have adjusted my thinking thinking accordingly. Are you suggesting that doctors who used to use leaches to suck the bad blood out of patients years ago, should have continued doing that because after all, they did it once? I reserve the right to change my mind, and I think most intelligent people do the same. However, I will FULLY explain why, I changed my opinion and why we no longer use nextScaleStop media. First of all, shortly after I wrote that in 2007, I discovered that the production of the original nextScaleStop media, which was certified by DVGW-512 and allegedly was tested as 99.6% efficient was no longer being used, for whatever reason. This was not publicized by nextScaleStop, and they continued to lean heavily on that DVGW-512 certification, even though the new media was of an entirely different composition as the original medi,a and in fact, looked dramatically different! We begin experiencing failures of both the old media and the new media which I felt were unacceptable. It was during that period that we discontinued using the media from nextScaleStop and for nearly two years we have used our new 4.5 MEP Media with much better success. In fact, we can count our failures on one hand. It is not my intent to speak badly of nextScaleStop, but you asked the question and I have answered it. In fact, I have heard that nextScaleStop is no longer using the media that they used after switching from the DVGW-512 media. Yet, in their Watts One-Flow literature, they continue to refer to the DVGW-512, which is no longer applicable and more than a tad misleading. Here's what they say in their literature:

If they have re-tested this media and have certification, then they have failed to tell me or most other people who are in the know about these things. If I am wrong about this, then this is an excellent opportunity for them to set the record straight. If not, then Watts should remove the above from their literature. You also said:

I suspect too many competitors met this standard in 2007-2010, so you decided it’s worthless.

You can speculate all you want, and it is just that: "speculation." The fact is, I do not believe that ANYONE has a product which is 99.6% efficient. Figures don't lie, but liars figure. Some products work better than others - that's the truth! But to hold on to old ways of doing things when you have more information and technology available is just plain silly, and that is why I have changed my position, and for the record, I do not believe that ANYONE meets this standard! To sum it up: I know of no other media that has been tested by DVGW-512. Some companies say that they have tested theirs to DVGW-512 protocal, but that may not be the most effective protocol anyway, and no one is using it in the real world. We do have access to testing facilities (see photo below) where scientific studies are done on this media and from that testing, we believe that our MEP 4.5 Media is test best media commercially available. The composition is a closely guarded secret and we will not divulge what it is until our industry agrees upon some standard protocol for testing. [caption id="attachment_412" align="alignleft" width="300" caption="Testing for scale forming in treated and untreated water"] 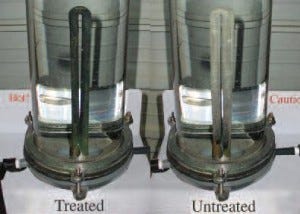 [/caption] We do not engage in deceptive advertising - we do not call our GreenWave system a "water softener" because it is not! It is a conditioner which causes the calcium and magnesium not to stick to surfaces, but it does not cause you to use 40-60% less soap, nor is it "naturally softened water," as some companies infer. We tell the truth as we best understand it at the time, and as we gain more knowledge, we will always apply that knowledge the best way we can, and if means changing our mind or position, so be it. A "witch" doctor doesn't use sound scientific principles. We do, which begs the question: "Which" Doctor am I? Call me names all you want, but I will let my records and the facts speak for themselves.
August 29, 2010
Comments
Tony C.
Hi Mark, I live in California and will be moving to a new house next week. I've been reading a lot about saltless conditioners and is leaning towards buying a system from Advancedwaterfiltration.net. They claim a 99.6% effectiveness against scaling which is my main reason for wanting a conditioner. Are you aware of this company? I appreciate your response. Also, if I purchase green wave 12 gpm system, what is the cost of the replacement media? And how often is it generally replaced?
Reply
mark
Tony, The Water Doctor Replied: 99.6%? Pretty good! Why not 107.3%? The only company who claims 99.6% effectiveness is nextScaleStop and they no longer use that media which as “allegedly” validated at 99.6% effectiveness by DVGW-512. In fact, I believe they now use the same media we have been using. The advanced water filters site is very devoid of any information as to how it works. Frankly, the lack of information on their site make me very suspicious of the product. There is very little information. Check them our with the BBB as you would any company. The GreenWave media needs replaced very 4-6 years. If it needs replaced in years 4 or 5, it will be $189.00. After year 5, it would be $356.00. Be careful! Things that sound too good to be true, might be!
Reply
Andrew
Hi Mark, Man there is alot of info here I am a little overwhelmed!!! My situation I live in rural Nova Scotia Canada and have a well. The worst of my issue is the rotten egg smell, I also get some red/brown coloring near drain and on shower heads, A person representing http://www.envirowatertec.com stating he can eliminate this and also offer a saltfree conditioning system I think called Watch Dosing Softener with Filtersorb SP3 Your thoughts appreciated
Reply
mark
Andrew, The system will probably work to remove scale, but some of their claims are dubious, at best. The Dosing Softener adds a chemical to your water to make it feel "slick" like soft water.
Reply
| US Water Systems Blog
[...] kind of stuff I lose all confidence in a company.  nextScaleStop is not what they say it is (check THIS out).  I would be glad to talk with you.  Please call me at your convenience at [...]
Reply
Pelican and PurHome Saltless Conditioners - Best Water Filter Store | www.BestWaterFilterStore.com
[...] kind of stuff I lose all confidence in a company.  nextScaleStop is not what they say it is (check THIS out).  I would be glad to talk with you.  Please call me at your convenience at 800-608-USWA. [...]
Reply
Neil Rinearson
Hello 'Water Doctor' Mark, I have spent a long time over the past couple of days doing what research I can on these saltless water conditioner. The whole issue has become confusing...but I'm trying desperately to properly evaluate my options. We have a nasty problem with scale and yet I DO NOT like soft water via typical sodium or phosphorus softening systems...I can't stand that damned 'greasy/soap ain't gone' feeling. That I've gotten this far in the Google list (think you're on about page five of my search) is a testament to how concerned I am. I've noted that numerous companies hawking the 'next-stop media' type systems use the same justifications for their worth...many even using the exact same textual references. This strikes me a bogus. Also, one article I read mentioned that only ONE salt-free conditioning system had ever met the German test criteria/certification, and that was a cathotic system...not these 'next-stop' or 'SP3' crystallization systems. Now I read above that you've found fault with some of these companies as marketing ineffective media. I'm glad to avoid an expensive mistake. However the media you DO recommend; what are its 'certification' credentials? Does it meet the...perhaps fancy but non-applicable...German DVGW standards? More importantly, if the crystallization-suspension of the calcium only lasts for a short period of time...what happens to water that passes through the unit, on to a hot water heater and then remains static for hours or, perhaps, days? In those length time periods would the calcium not move out of suspension and back into dilution? If the GreenWave system can be verified as effective I'm very much interested in learning that. Thank you, NJR <strong>THE WATER DOCTOR RESPONDED HERE: <a href="https://blog.uswatersystems.com/2011/01/saltfree-water-conditioners-boom-or-bane/" rel="nofollow">https://blog.uswatersystems.com/2011/01/saltfree-water-conditioners-boom-or-bane/</a> </strong>
Reply
Search The Blog
Categories
TOP SELLING PRODUCTS
TOP SELLING PRODUCTS