What is the Best Way to Remove Chloramines from Your Water? 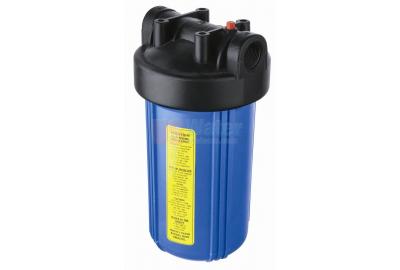 What is the Best Way to Remove Chloramines from Your Water?

First of all, before you decide to remove chloramine, you need to understand what chloramine is. Chloramines are formed when a municipality adds a mixture of chlorine and approximately 20% ammonia to the water supply.  Many municipalities are changing to chloramine from chlorine because the chloramine is more stable as it does not evaporate like chlorine, even if it is a weaker disinfectant.  Additionally, chlorine produces disinfection byproducts (DBPs) known as trihalomethanes (THM's) which are VOCs (volatile organic chemicals) that are highly carcinogenic. Many people erroneously believe that chloramine has fewer disinfection byproducts, however new studies show that  iodacetic acid is a chloramine DBP that could be even more insidious than THM's.  Chloramines also are linked to increased lead and copper corrosion which can result in elevated levels of lead and cooper in water to which chloramine has been added.  Additionally, when combined with fluoride, the corrosion level increases.  It is also a fact that chloramine degenerates rubber and other parts in plumbing systems, ice makers, washers, dishwasher, toilets and sink faucets, to name but a few. Additionally, ingestion is not the primary route of exposure to chloramine.  Inhalation and dermal contact are likely the prime routes of exposure to chloramine.  This would mean that if you truly want to remove or reduce chloramine, you would have to do it for the whole house and not just the drinking water.  By the time, the chloramine in the water reaches your home, it has accomplished it's job as a disinfectant, and if you really want high quality water and are concerned with the health risks associated with chloramine exposure, you will certainly want to consider how best to reduce it. Notice, I didn't say "remove" it?   There reasons I said "reduce" and not "remove" is that it's probably impossible to remove all of the chloramine and it's associated compounds.  However you can substantially reduce it with proper treatment.  If someone says they can remove it all, you might want to run as fast as you can. [caption id="attachment_2309" align="alignright" width="120"]

Cartridge Filter[/caption] Before we discuss what "proper treatment" is, we are going to list some other websites where you can read about chloramine:

OK, let's get into what is the best way to remove... actually "substantially reduce," chloramine.  The method is called "Prolonged Contact Catalytic Granular Activated Carbon Filtration" with the emphasis on "prolonged contact." There are a couple of ways to use the Catalytic Carbon - (1) is in a Cartridge Filter such as one to the right; and (2) a pressure vessel with carbon inside it (pictured on the left).  The problem is that a cartridge filter that is 4.5" x 20"  will flow a maximum of 1.5 gallons per minute (GPM).  A pressure vessel that is 13" x 54" in diameter will flow 13 GPM but will remove the greatest amount of chloramine at below 10 GPM.  The slower you can run the water through the catalytic carbon, the better you will remove the chloramine.  If you are really concerned about chloramine, then you might want to use two tanks to prolong that contact and increase the removal ability. If you just want to remove chloramine from just your drinking water, you may want to use a 4.5" x 20" Cartridge Filter at a sink where you only flow 1.5 GPM.  That's also good for removing chloramine for the fish, but it does nothing to remove the chloramine in the shower or bath and of course, it doesn't protect the plumbing an appliances.  A Backwashing Catalytic Carbon Filter like the US Water Matrixx Backwashing Filter is usually the choice for a whole house. Frequently, chloramine exists in conjunction with fluoride which also has many deleterious effects.  I have discussed the effects of fluoride in a previous BLOG.  So, if you want to reduce BOTH chloramine and fluoride, then you would need something like our US Water Ultimate System. Finally, if you really are serious about removing chlorine, chloramine, fluoride and a host of other chemicals from the water then you could follow up the Fusion Ultimate Superfilter with a Whole-House Reverse Osmosis System.   Photo credit - Chloramine Info Center

January 25, 2015
Comments
fred burmeister
My client produces high volume hydrogen peroxide based products for professional hair color, known as "developers." Recently he has experienced stability problems with his most concentrated formulations and on further investigation found that his water supply region has switched to chloramine from chlorine for disinfection. This is the only difference noted since the stability issue popped up. What are your recommendations for commercial grade chloramine reduction on a process that uses approximately 600 gallons of water per day?
Reply
Mark Timmons
I would recommend this: https://www.uswatersystems.com/us-water-backwashing-catalytic-carbon-filter-8-20-gpm.html
Reply
S
Honestly I do not trust at all "water experts". Not one bit. I worked years ago for a very well known manufacturer of whole house reverse osmosis systems. I saw them sell the systems for $4,500 - $5,000 dollars when it actually cost them a grand total of $400 to make! And what do we have here listed above a recommendation for a whole house system at guess what $4500.00 Nothing changes. Same old BS. There you have it. For once you have been told the truth.
Reply
Mark Timmons
Just because you worked for some scam artist does not mean that everyone is a scam artist. If a whole house RO system could be built for $400 and sold for $5,000, everyone would be doing it. I respectfully submit that you have no clue what you are talking about.
Reply
x
Mark Timmons, you do not seem to know what you are talking about. S above is 100% correct. The well known company I worked for Rainsoft did sell their systems for about $4,500 and yes their actual cost was just over $400. So clearly you have no clue.
Reply
Mark Timmons
I know they sell some cheap stuff, but you are severely deluded to think we have margins anything close to that. Of course, I doubt that you want to be confused with facts, since your mind is already made up and you "know" you are right, regardless of any evidence otherwise. Let me break it down even more: You sir, are a Blowhard!
Reply
Sam
Terrific information, thank you very much. I'm wondering if you can point me in the direction of a shower filter that reduces chloramine, pretty please. My skin and I beg you.
Reply
Mark Timmons
We use a system like this to substantally reduce chloramine and chlorine: https://www.uswatersystems.com/us-water-bodyguard-whole-house-chemical-removal-filtration-system.html Our smallest one has 1 cu/ft of our mixed blend carbon, which weighs 27 pounds. A shower filter has a bout 8 ounces of carbon... or less. Now you know why we do not sell shower filters. They are very ineffective.
Reply
chris harrell
Nothing removes total chlorines better than a carbon filter. Chlorine and derivatives of chlorines harm the filters in RO systems unless removed beforehand
Reply
Mark Timmons
But, it takes catalytic carbon to remove chloramine. I am not sure what point you are trying to make.
Reply
Terry Winiarski
Will the Nuvo H20 system remove the chloramines in my Phoenix, AZ home water supply?
Reply
Mark Timmons
In a word NO!
Reply
Neil
We live in a condo so we are tight on space. Our municipal water system uses chloramine. Is there a whole house filter that is relatively small in size?
Reply
Mark Timmons
Here is a very good and economical solution: https://www.uswatersystems.com/module-2-us-water-bodyguard-whole-house-chemical-removal-filter.html It takes up 9” of floor space. Will that work?
Reply
Search The Blog
Categories
TOP SELLING PRODUCTS
TOP SELLING PRODUCTS