What is a Hybrid Water Softener and Why Would I Want One? 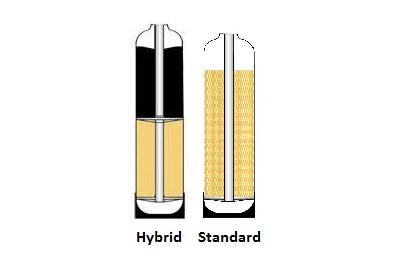 What is a Hybrid Water Softener and Why Would I Want One?

That's a good question and one that we hear frequently.  So, if you are on well water, you can just skip this post.  A hybrid water softener is for municipal water because it is engineered to remove or reduce the chlorine, chemicals, pesticides, tastes and odors which are generally associated with city water. A standard water softener has a tank that has ion-exchange resin which takes out the hardness from the water and a hybrid water softener also has that, but a regular water softener does not have a second chamber which has carbon to remove the tastes, odors, chlorine and chemicals. This second chamber is above the resin and keeps the resin and carbon separated.   This does two things:  (1) it keeps the carbon in one chamber so that it does not get mixed with the resin and therefore is denser and able to provide better filtration of chlorine and chemicals; and (2) by taking the chlorine out ahead of the resin, the life of the resin is dramatically increased, since resin is sensitive to chlorine and easily degraded in it's presence.  So, removing the chlorine before it gets to the softening resin will make your water softener last up to twice as long. In itself, that should be enough reason to have a hybrid water softener if for no other reason than to make your water softener last twice as long.  But, in reality there's a lot better reason.  That reason is what chlorine does to YOU.  Your body.  Your health.  Your life and your family.   Don't take my word - listen to what some of the experts say:

Chlorine is objectionable for bathing and drinking in concentrations as low as .5 PPM.  A swimming pool may be 2.0 to 3.0 PPM.  According to the EPA, chlorine combines with organics in the water to form THM’s (trihalomethanes) which are known carcinogens.

“Showering is suspected as the primary cause of elevated levels of chloroform in nearly every home because of the chlorine in the water.”  - DR. LANCE WALLACE - U.S.E.P.A.

“A long hot shower can be dangerous.  The toxic chemicals are inhaled in high concentrations.”       - Dr. John Andelman - BOTTOM LINE