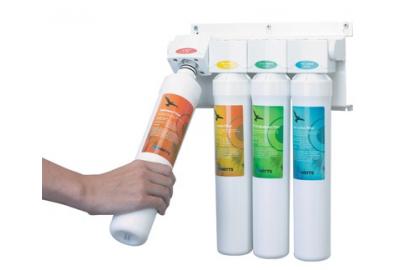 Posted in: Reverse Osmosis
By Mark Timmons
No comments
More from this author

We were one of the first companies who sold the Kwik Change reverse osmosis system manufactured by Watts.  I was skeptical at first because with new products you just never know what you will get.  But our faith was rewarded and the product preformed as well as advertised... and the filters were really easy to change ... even if they did cost more. Sounds like a happy ending?  Well, Watts decided to "fix" the Kwik Change reverse osmosis system even though it wasn't broke.  Long, long, long, long story short:  it never worked well after the first year.  They fixed it and they fixed it and they fixed it and we said "ENOUGH ALREADY."   When you have a company as big as Watts, you would think they would have the engineers who could fix problems.  Yeah, right! We have lots of customers who can testify to how bad the Kwik-Change Reverse Osmosis System worked.  It reached the point where our customer service people refused to sell the product.  Maybe Watts will get it right someday.  The thing is:  we aren't holding our breath. If you are purchasing a reverse osmosis system, forget the Kwik Change, the Quick Change, the Easy Change models and buy the ones that use "industry standard" 2.5" x 9-7/8" (10") replacement filters.  They are inexpensive, and they work.  What a novel idea! That's all we sell now... and they just work!  Function overcomes form every time!
December 9, 2011
Comments
Search The Blog
Categories
TOP SELLING PRODUCTS
TOP SELLING PRODUCTS