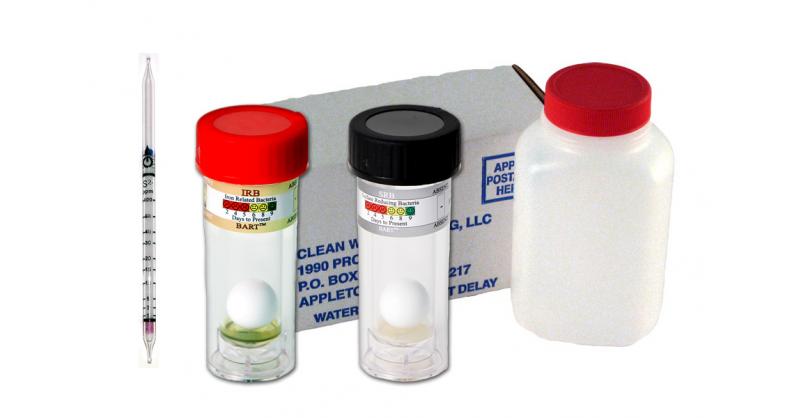 bacteria Iron removal hydrogen sulfide iron filter water softener Water Treatment Water Testing Iron Testing Sulfur Testing Iron Bacteria Bacterial Iron Sulfur Reducing Bacteria Ultimate water test
Posted in: Iron Removal, Water Softening, Sulfur Removal, Water Filters
By Mark Timmons
6 comments
Any type of water treatment equipment needed for well water treatment is secondary to a good water analysis.  When you have well water that smells bad and/or stains, the type of equipment you need to fix it depends upon what exactly is in the water and at what level. For instance, If you have iron and/or manganese (which frequently exist together) in your water, it is imperative that we also know at what levels they exist  (ppm which is parts per million), what the pH is, what the hardness is, whether the iron is bacterial in nature or not and several other contaminants. If you happen to have water that smells bad, which is frequently caused by sulfur which creates that distinctive rotten-egg smell, we also need to know the above information as well as the level of hydrogen sulfide and whether it is bacterial in nature. We find that a a fairly large percentage of well water has iron or sulfur... or both, that is what is called iron-reducing bacteria or sulfur-reducing bacteria.  That kind of water  needs to be treated differently that water that has iron or sulfur that is not of a bacterial nature. Knowledge is power and the more we know about your water, the better we can treat it.  To that end, we have designed a test that combines three (3) products into one package which gives us everything we need to treat rusty iron water, manganese-bearing water and/or hydrogen-sulfide enriched water. The first is the Sulfur Stick which looks like an old oral thermometer.  It has a glass tip on either end which both need to be snapped off.  Then you draw a glass of water and place the Sulfur Stick in the glass for approximately three (3) minutes.  Then you simply read the level of sulfur under the glass tube. The second test is called the Bart Test for Iron Bacteria and the Bart Test for Sulfur bacteria.  These tests have to be done separately as the bacteria involved react to different media.  BART stands for Biological Activity Reaction Test and  is a test that has to be done by you and monitored up to 15 days to see if the bacterial reaction occurs and to what degree.  It will turn color is the iron and/or sulfur bacteria is present. The third test is the Clean Water Test which is accomplished by drawing a bottle of water and sending it to an independent laboratory in Wisconsin, where it is tested for the following contaminants: This test takes about 7-10 days, so about the same time you find out if you have sulfur or iron bacteria, you will get the results of the analysis from the laboratory.  At that juncture, you are armed with the information you need to make a decision about how to best treat your water.  When a water treatment expert is provided that information, they are able to recommend an appropriate solution that is most economical and sustainable. Deluxe Water Test Link
September 5, 2012
2239 view(s)
Did you like this post?
0
0
Comments
Harland
Where do I find this test kit you designed to test water in above article?
Reply
Mark Timmons
That may be a test that was discontinued, but here is the current one: https://www.uswatersystems.com/us-water-lab-water-test.html
Reply
Gayle
Where do you find the sulfur stick mentioned in the article?
Reply
Mark Timmons
Here you go: https://www.uswatersystems.com/single-sulfur-dioxide-test-tube.html
Reply
Joseph Blackmon
How much does it cost to have the water tested at the lab you mentioned in Wisconsin and does it test for the presence of unsafe levels of all harmful chemicals?
Reply
Mark Timmons
We have actually switched to a better lab that uses 100+ labs across the country to speed up service. Here are the most popular tests: https://www.uswatersystems.com/water-tests/city-water-tests
Reply
Search The Blog
Categories
TOP SELLING PRODUCTS