No salt Pelican Easy Water No salt water softener water softener Hybrid Water Softener Green Wave Pelican Water Water Softening Aquasana Nuvo H2O
Posted in: Salt-Free Systems, Water Softening
By Mark Timmons
4 comments
Anyone who has hard water knows about "Limescale" in pipes and appliances, but did you know that limescale rarely forms in the cold water plumbing?  Ask any plumber - they can tell you that limescale is prevalent in hot water lines, hot water heaters and the hot water side of appliances and plumbing fixtures.  Why is that?  It's very simple - when hard water is heated, the hardness precipitates to form insoluble calcium carbonate which deposits layers and layers of limescale on surfaces, which can even eventually can totally close up a pipe. Not only does the limescale buildup inside of a water heater eventually destroy it, but it can also increase energy bills by up to 90% over time!  That can cost you thousands of dollars.  The Green Wave Solo protects your water heater by forming a one molecule thick coating of a patented polyphosphate on everything that it touches.  That simple, but extremely effective process, totally prevents limescale from forming in your pipes, appliances or water heater. [caption id="attachment_5524" align="alignleft" width="267"] 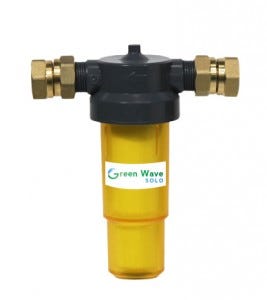 Green Wave Solo Conditioner[/caption] The Green Wave Solo is the new, revolutionary and the most economical way to deal with hard water. The Green Wave Solo totally prevents limescale on and in appliances, pipes, fixtures - actually everything water touches. The Green Wave Solo System is the new standard by which all salt free water conditioners will ultimately be judged. The new Green Wave Technology effectively "Seals" the plumbing and appliance surfaces so that calcium and magnesium (often called limescale) cannot stick. It also helps to remove existing Limescale which may have accumulated. Additionally, the Green Wave water treatment method is environmentally friendly, uses no electricity and 100% safe for drinking water. [caption id="attachment_5858" align="alignright" width="136"]

Green Wave Hot Water Limescale Filter[/caption] The Green Wave Solo is best installed on the cold water line to the water heater.  It is certainly fine to install it on the whole house, but there is really no need to do that.  Remember, limescale occurs on the hot water side. That way, operational costs are lower because the replacement cartridges last 60 to 120 days... or more. Part of the Green Wave System is the Green Wave Hot Water Limescale Filter.  Since the limescale is formed during the hot water heating process, but since it cannot stick and form Limescale, it can end up plugging faucets, fixtures and valves, so right after the water heater, we have our Green Wave Hot Water Limescale Filter.  It traps all the limescale that is formed during the water heating process, and since it cannot stick, it ends up in the filter.  Just change the filter approximately every six months and you are protected. The Green Wave Salt-Free Water Conditioner is the best value in water treatment today.  Does it sound too good to be true?  It's not.  Check us out at our Green Wave Main Page. Many customers add a whole house 5 micron sediment filter, carbon filter, Pulsar filter or the new Silecte Quantum Disinfection system that kills bacteria as well as the Green Wave Solo system.  If you are not sure what is best for you, ask one of our Certified Water Specialists. One thing is for certain:  You can spend a whole lot more on a salt-free system to prevent limescale, but you simply cannot find a system that prevents limescale as well as a Green Wave Solo.
December 13, 2016
1449 view(s)
Did you like this post?
0
0
Comments
Jamesgasser
Would this work on a inline cold water fora 5kv kohler steam generator?
Reply
Mark Timmons
I would not use it for that!
Reply
John J Fritz
In researching salt free water conditioners, some customer review said that installation of such a unit caused "crystals" to clog up their system and utilities. A vendor said that this could be remedied by a plumber flushing the system. Is any of this factual? Could flushing be done by an end user, if it is necessary? Thanks.
Reply
Mark Timmons
Not factual.
Reply
Search The Blog
Categories
TOP SELLING PRODUCTS