The American Water Crisis: 2022 in Review 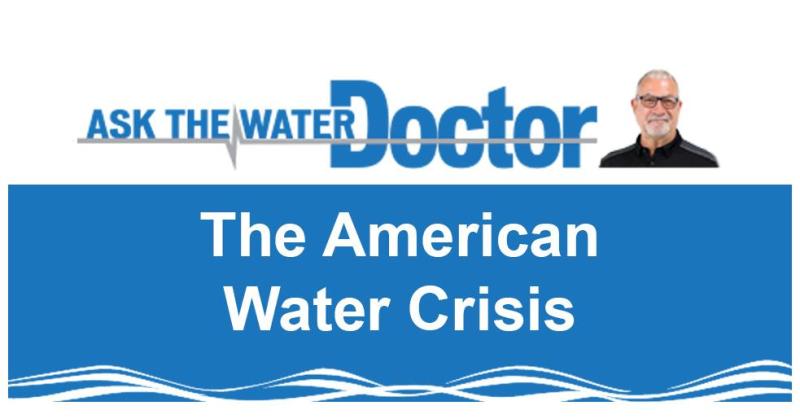 Posted in: Water Testing and Analysis
By Mark Timmons
No comments

For about ten (10) years, I was on the Board of Directors for a non-profit that provided water purification systems for people in Haiti. In cities like Port-Au-Prince and surrounding areas, nearly 3,000,000 people live without a public water supply, a sewer system and rarely have their trash picked up. Of course, this is a very rainy country and when it rains, sewage and the like spread easily due to the lack of wastewater infrastructure. 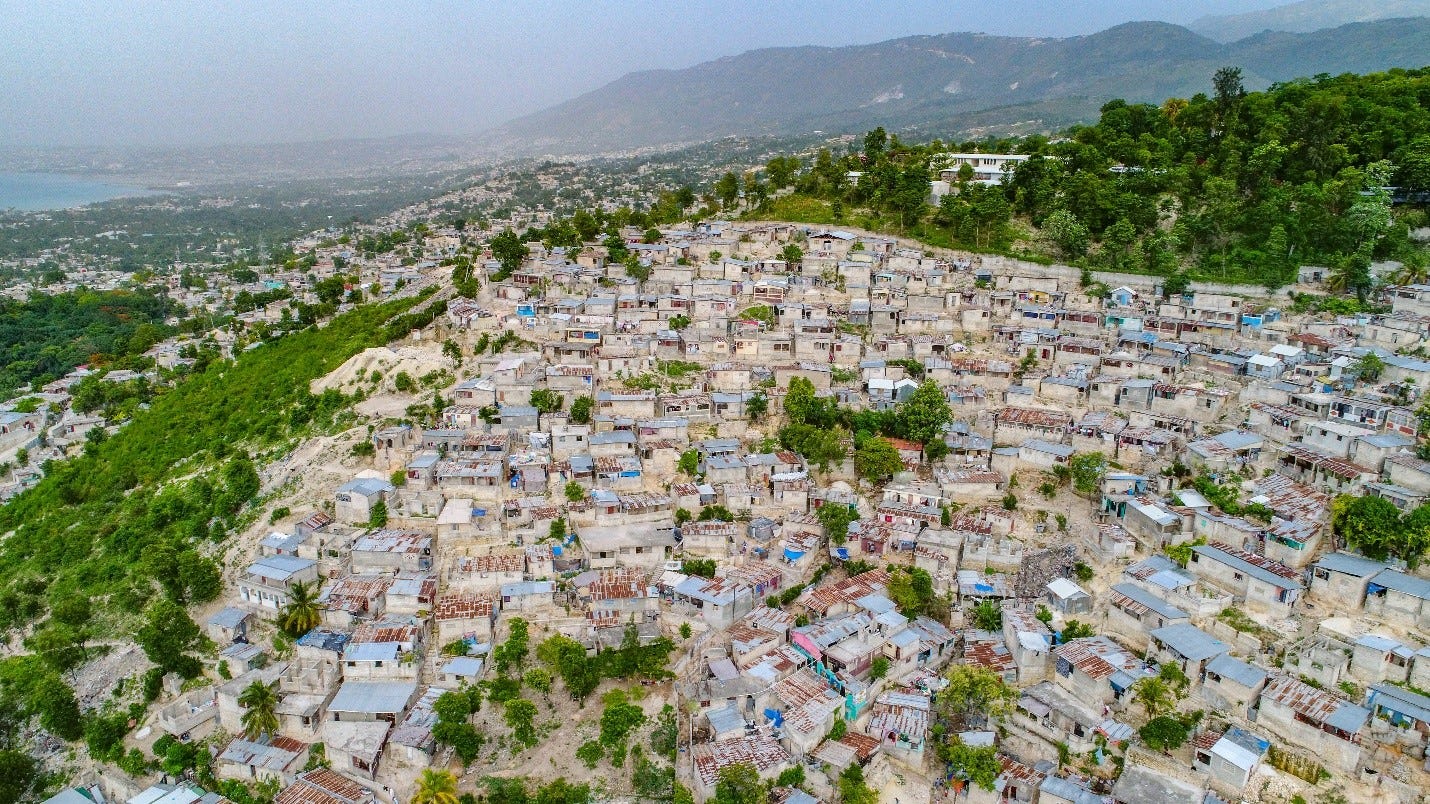 Aerial photo showing how densely populated Port-Au-Prince happens to be.

This makes sanitation and safe water difficult to obtain. It is common to see garbage piled outside of people’s homes, like below: 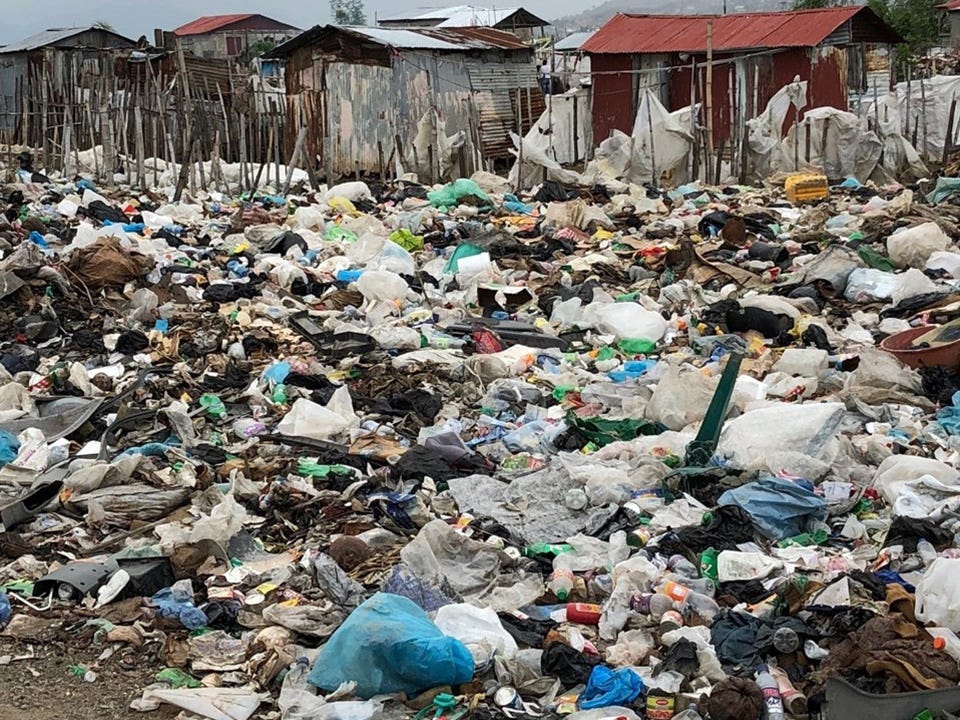 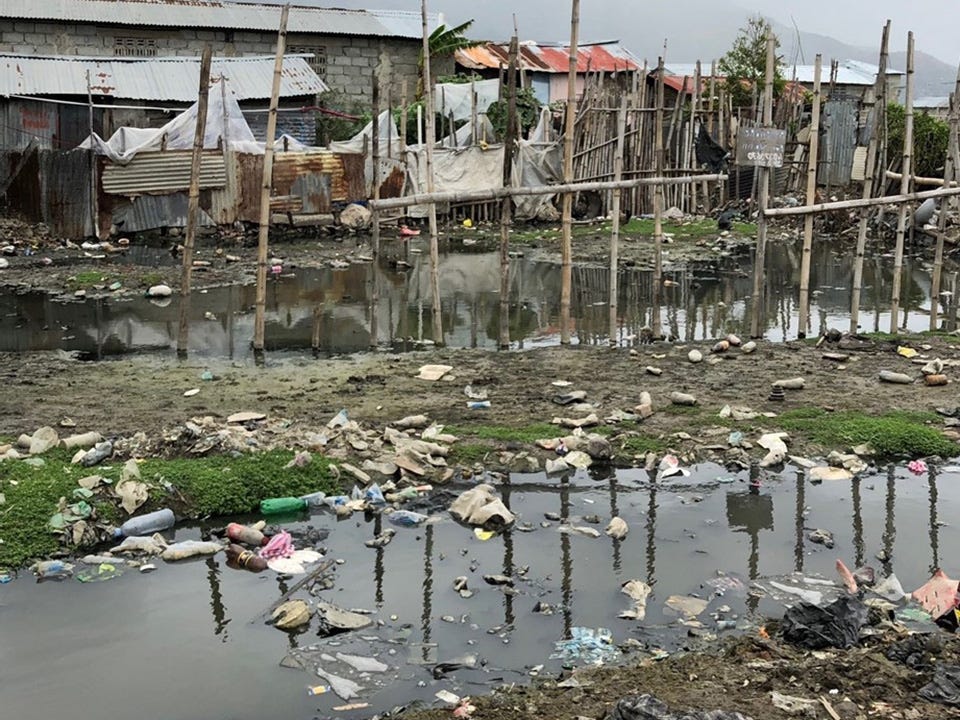 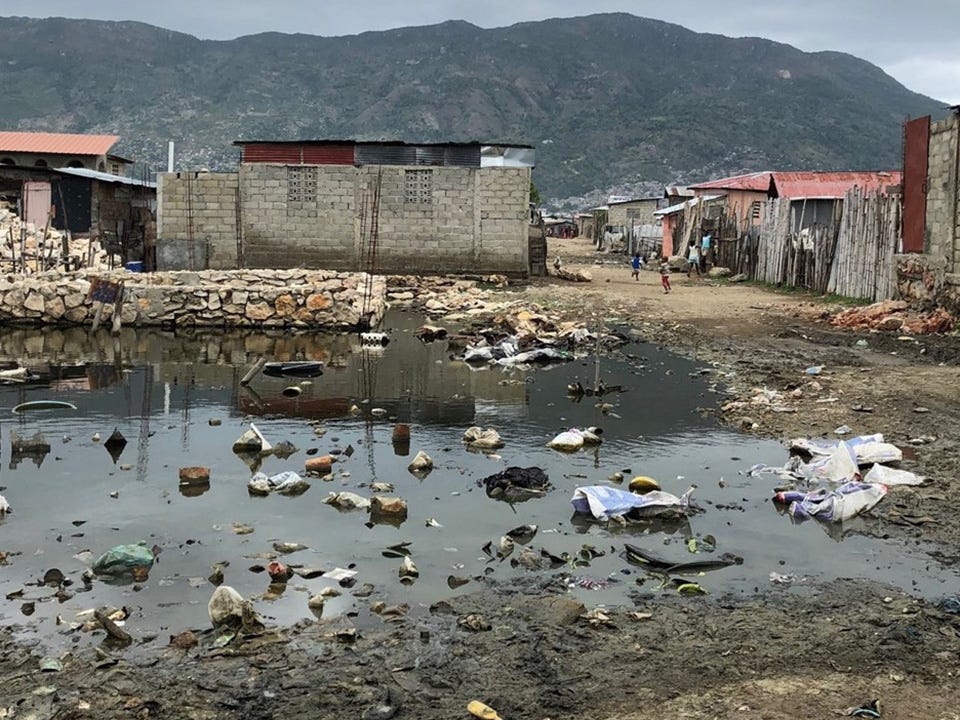 The sewage, garbage, and runoff from the rain becomes everyone’s problem. Guess where they get their drinking water? Gross!

I am not making this up. I have seen it repeatedly. What is amazing to me is that for almost three years, Haiti has had few cases of cholera, but it returned in 2022.

Haiti’s problems have been prominent and obvious and today we are only talking about them because of the problems that millions of Americans are facing.

For many years, Americans have come to trust their water quality without question, which may have been somewhat naïve or maybe it fell into the category of “Ignorance is Bliss.”
After all, the Government would never let us down. Yeah, sure!

While we don't have the problems with the magnitude of Haiti, our problems may be just as insidious. Some areas are literally running out of water. One big concern is the California drought. California’s agriculture industry is at a high risk of dying, which will greatly impact our food supply.

Daily, we hear about the following water problems:

In Jackson, Mississippi, residents were told to boil their water in July and the order lasted until September 15, 2022. However, the city issued 20 additional boil water notices since Sept 15, 2022. This was because the water supply was contaminated with E. coli bacteria. Escherichia coli (E. coli) bacteria normally live in the intestines of healthy people and animals. Most types of E. coli are harmless or cause brief diarrhea. But a few strains, such as E. coli O157:H7, can cause severe stomach cramps, bloody diarrhea, and vomiting.

This is not an isolated incident. In November of 2022, Houston, Texas issued a boil advisory for 2,000,000 people (about the population of Nebraska). While there is no official count of the exact number of boil-water notices issued in 2022 and years past, this year there have been boil-water advisories in cities including Detroit, Austin, and Laredo (Texas).

Since the passage of the Clean Water Act in 1972, access to safe water for all Americans has been a US government goal. Yet millions of people continue to face serious water quality problems because of contamination, deteriorating infrastructure, and inadequate treatment at water plants. A nine-month investigation by the Guardian and Consumer Reports found alarming levels of forever chemicals (PFAS/PFOA), arsenic and lead in samples taken across the US.

I am not intending to scare you, but there is also the factor of “Who do you believe?.”

In New York City, it was reported that a certain housing complex had arsenic in their water. The problem is that the testing company had indeed introduced arsenic into the water. There really was no problem… so there is also that to contend with.

Manufacturers use PFAS to make stain-resistant fabrics and carpets, water-repellent clothing, nonstick cookware, and hundreds of other common products. The compounds can seep into water from factories, landfills, and other sources. And because they do not easily break down in the environment, they are often called “forever chemicals.”

At least 2,337 communities in 49 states have drinking water known to be contaminated with PFAS, according to a January analysis by the Environmental Working Group (EWG), an advocacy organization. Consumer Reports tested water across the country and found PFAS in over 95% of the water supplies sampled. Maximum Contaminant Levels (MCLs) are typically developed by the Environmental Protection Agency (EPA) under the Safe Drinking Water Act. Thus far, the EPA has developed a Lifetime Health Advisory (LHA) level of 0.07 micrograms per liter (µg/L) for two PFAS compounds — PFOS and PFOA, but this is not an MCL.

Here is what the EPA has to say about this:

Under the Safe Drinking Water Act, EPA has the authority to set enforceable National Primary Drinking Water Regulations (NPDWRs) for drinking water contaminants and require monitoring of public water systems. In March 2021, EPA published Regulatory Determinations for Contaminants on the Fourth Contaminant Candidate List which included a final determination to regulate perfluorooctanoic acid (PFOA) and perfluoro octane sulfonic acid (PFOS) in drinking water. EPA is developing a proposed National Drinking Water Regulation for publication by the end of 2022 for PFOA and PFOS. As EPA undertakes this action, the agency is also evaluating additional PFAS and considering regulatory actions to address groups of PFAS.

The MCLG is the maximum level of a contaminant in drinking water at which no known or anticipated adverse effect on the health of persons would occur, allowing an adequate margin of safety. The enforceable standard is set as close as feasible to MCLG. EPA considers the ability to measure and treat a contaminant as well as costs and benefits in setting the enforceable standard.

These problems are massive because the harmful side effects are not apparent. It may take months or years for the horrible symptoms to manifest themselves.

These Events are not Isolated

In a recent test conducted with Consumer Reports and the Guardian, volunteers from 36 states plus Washington, D.C. teamed up to test the drinking water quality from 120 sites across the country (in some cities there were multiple sites). Each participant received test kits for PFAS, arsenic, lead, and other contaminants of concern, and a detailed video showing how to collect the samples. Here is a list of the cities involved. Of those samples, over 95% were found to have levels of these contaminants which were concerning. We cannot draw any conclusions from this testing because it was just one test on each water system. Testing water is also expensive, but we do gain a tremendous insight into the magnitude of the problem. 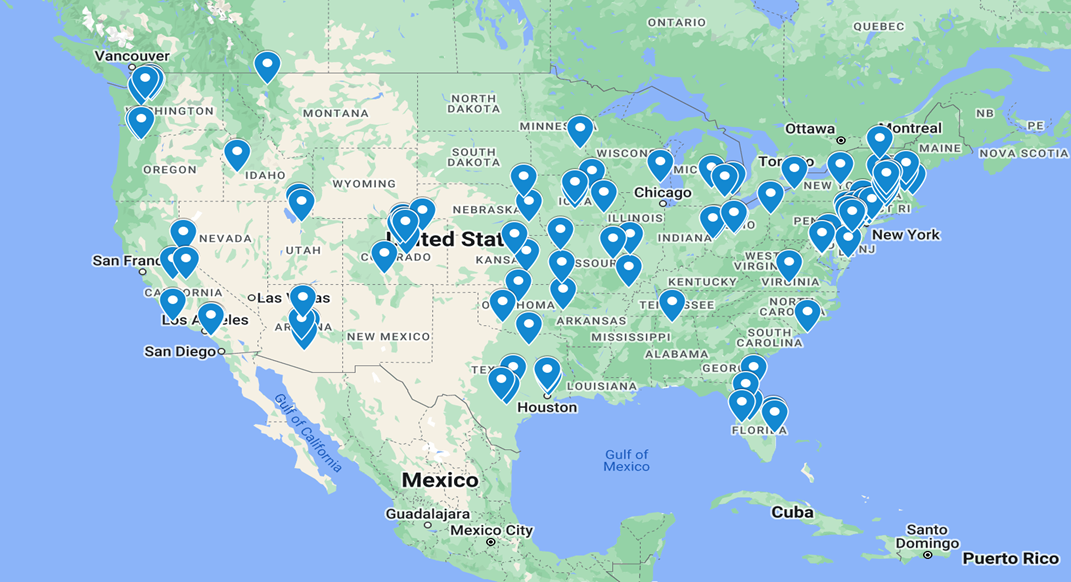 
It will take years for the government and municipalities to fix these problems. New water treatment plants, millions of miles of water pipes being installed, and re-building pumping stations and water towers may take trillions of dollars to fix and that begs the question: Since 99% of the water produced by a municipality is not used for drinking or internal consumption, are we to treat all of it as if it were? Do you need quality drinking water to flush your toilets, wash off your driveway and other mundane tasks?

There is no perfect solution. Many of these water problems are in inner cities, where it is low income. What causes that disparity is clear. As the rich and middle class have left the inner city in favor of the suburbs, the taxation rate in the inner city was no longer as substantial as it is in the suburbs and federal funding was used to build new infrastructure, not replace the old infrastructure. So, it would not be surprising to find that the water quality in the suburbs may be better, especially when it comes from contaminants like lead. However, contaminants like arsenic, bacteria, PFAS, and nitrate are no respecter of inner city or suburbs – they enter at the water plant or distribution system.

Of course, Reverse Osmosis discharges wastewater in the cleaning process, so it is not getting removed from the environment. However, it solves the problem for the individual homeowner. We can solve this issue in perpetuity, but that does not mean we must continue to use that water today. 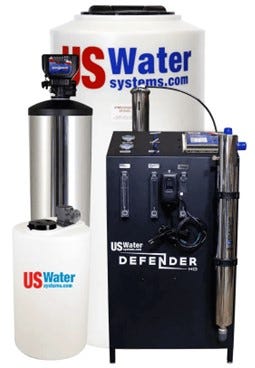 One of my sons has a whole house RO system, which in most cases is also a whole house water softener because it removes the hardness as well, to below 1.0 GPG (Grain Per Gallon) which is the accepted definition of “soft water.”

However, before you decide upon a Whole House RO system, we urge you to talk to one of our Certified Water Specialists or Master Water Specialists to get all the facts. The newer whole house reverse osmosis systems waste as little a 1 gallon of water for every 4 or 5 gallons made, and some people use that water for irrigation, flushing toilets and the like as a way of being more Green.

I do not have a Whole House RO, primarily because I have copper pipes and want soft water. I love soft water and so does my wife and family, but with copper plumbing you cannot have RO water and soft water at the same time, because it will leach the copper from the pipes. My son has PEX plumbing.

So, what do I have? I am on municipal water, and here is how I treat my water:
STEP 1: 5 Micron Magna Filter (Protects the entire system from solids and silt).
STEP 2: Hybrid Water Softener & Carbon Filter (Softens and removes chemicals)
STEP 3: Electro-Absorptive Nanofiber Filter (Removes lead, cysts to the submicron level)
STEP 4: Ultraviolet Disinfection System (Softens and removes chemicals)
STEP 5: Reverse Osmosis Drinking Water System (Perfect for drinking and eliminate bottles)