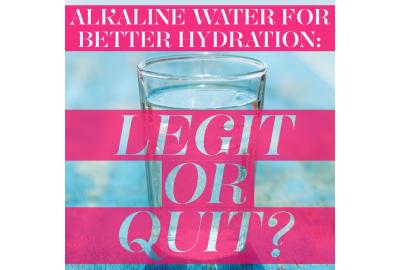 If you Google "alkaline water", you will get about 4,250,000 results including all kinds of companies trying to sell alkaline water devices, from ionizers and re-mineralization systems to all kinds of strange things that allegedly add alkalinity to the water.  Of course, most promise amazing health benefits up to and including everlasting life (I am only half jesting). Markus Rothkranz has a website called www.markusnews.com and at one point he used to extol the virtues of alkaline water - something he no longer endorses.  In fact, he says it is not only something he doesn't endorse - he claims that it is bad for you... and provides scientific evidence to back it up.  This is a 30 minute video, but worthwhile if you are considering alkaline water or an ionizer. https://www.youtube.com/watch?v=7O6GhVCvVgE So, there's that.  Want more?  Molly Shea, Health Editor of Yahoo.com addresses the issue in "Can Drinking Alkaline Water Keep You Extra-Hydrated and Disease-Free?"  The short answer is NO!  In part she writes:

"Water is nature’s perfect beverage. Hydrating, calorie-free, and readily available, the simple drink is as good as it gets for ensuring proper functioning of all your body’s organs. But what if there was a different water, an even more hydrating liquid that goes farther to keep you healthy and thriving?

That’s the premise behind alkaline water, a version of H2O with a pH level higher than 7. (A pH above 7 is considered alkaline, while a pH lower than 7 is acidic — normal water typically has a pH of 7).The thinking is this: Maintaining a bodily pH level of 7.4 is key to optimum health. Because so many foods in the modern diet are considered acidic, drinking water with a higher pH than normal can help your body stay alkaline and disease-free, improving all aspects of health. Proponents call it a better form of hydration, and some drink alkaline water exclusively.

While water with extra benefits has been revered for ages, the specialty bottled water industry has boomed in just recent years. “People are drawn to something that impacts the body’s pH [levels]. Whether it’s placebo or fact, people feel that drinking alkaline water will help them get healthier,” says Richard Medina Jr., co-founder of L.A. Distributing Company, a New Age snack and beverage distributor. Even Mark Wahlberg and Puff Daddy got into the game in 2013 co-founding “Aqua Hydrate,” a brand of alkaline water that they tout as a natural hangover cure.

But for all its celebrity sparkle and dramatic claims, can drinking alkaline water actually make you any healthier?

What The Science Says:

As alluring as it sounds, the answer is no, says Stanley Goldfarb, MD, hydration expert and professor at the Hospital of the University of Pennsylvania. “If you drink a lot of alkaline water, all you’re going to do is pee out a huge amount of alkaline material. There really is no rationale for this,” Goldfarb explains. Yes, maintaining the right pH balance is important, but your body does that on its own — no fancy water required.

“What people need to appreciate is that the body is designed to maintain its equilibrium in the face of whatever you take in,” Goldfarb explains. “We are designed to maintain the pH of our bodies in an extraordinarily specific range. We have so many defense mechanisms to prevent an accumulation of alkaline that drinking alkaline water will have little effect.”

As for claims that alkaline water can hydrate better than normal water, delivering vitamins and minerals to your body more rapidly and efficiently — those just don’t hold up. There are no studies that prove that drinking alkaline water is any more hydrating than your average tap, filtered, or bottled water, and any claims that it does so fly in the face of hydration research, says Goldfarb. “When it comes to… whether you’re taking in acid or alkaline, it really makes no difference,” he says.

But as much as alkaline water’s benefits have likely been overblown, so too have any potential side effects. Some warn against drinking too much alkaline water, for fear that it could lead to alkalosis — when your body’s pH level is too high, causing confusion, headaches, vomiting and more. According to Goldfarb, there’s very little chance that drinking alkaline water, even if you’re drinking it exclusively, could lead to any internal issues. “It’s not to say that you can’t overwhelm your system, but it’s rare.” That said, says Goldfarb, “if you have a disease, the answer changes, so I’m hesitant to say oh, no, drink what you want, [but in general] it won’t make a difference.”

As for whether water that’s naturally alkaline is any better than water that’s artificially alkalized, Goldfarb doesn’t see the evidence. “There’s no difference between natural and unnatural alkaline—it really doesn’t matter.”

There are some situations where the pH level of the water you consume does impact your health, Goldfarb explains. “For example, [for] some people who have kidney disease, their bodies cannot rid themselves of acid as quickly as others. If you’re prone to kidney stones, then acidity might be a problem.” A study did suggest that drinking water with a pH of 8.8 (which is more alkaline) can help relieve symptoms of acid reflux, when it’s done as part of a doctor-approved treatment plan. Those exceptions aside, swilling alkaline water won’t make much of a difference.

If you love the taste of a certain water and have some extra money to blow, spending it on pricey aqua isn’t the worst thing you could do. Just turn a wary eye to health claims and don’t expect any magic. "

If you care, my opinion is that the water treatment technology that removes the most and widest spectrum of contaminants is reverse osmosis.  We know for a fact that removing dangerous chemicals such as Chlorine, Chloramine, Fluoride and many other contaminants is a great idea because it is good for your body.  You need to get your minerals from food and supplements because water is not a significant source of minerals anyway.

(Photo: Stocksy/Aleksandra Kovac/Yahoo)
July 13, 2015
Comments
The Acid-Alkaline Truth Exposed! | KineticoArizona
[…] https://blog.uswatersystems.com/2015/07/the-acid-alkaline-truth-exposed/ […]
Reply
Mady barber
I have high iron content, sinks, hot water heater,getting ruined
Reply
Mark Timmons
We can remove the iron - Guaranteed! However, we need to know the level is and what other contaminants are in the water. You need to do this first: https://www.uswatersystems.com/us-water-lab-water-test.html
Reply
Search The Blog
Categories
TOP SELLING PRODUCTS
TOP SELLING PRODUCTS