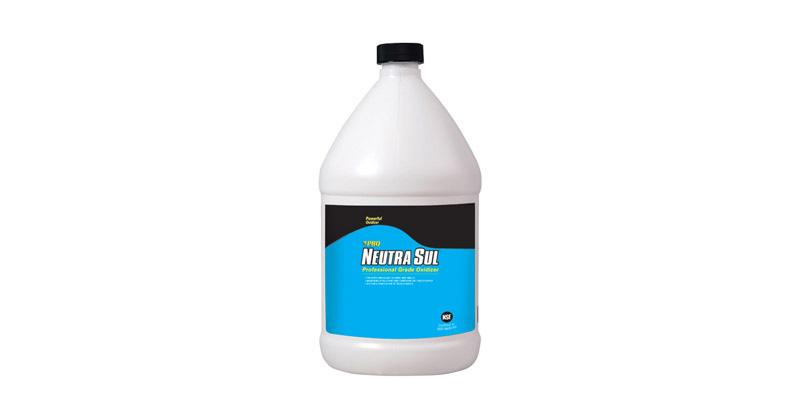 Iron removal sulfur hydrogen sulfide iron filter Hydrogen Peroxide H2O2 Catalytic Carbon Oxidation Oxi-Pro 7
Posted in: Iron Removal, Sulfur Removal, Water Filters
By Mark Timmons
10 comments
If you are a user of Hydrogen Peroxide (H2O2), you already know that it is the best way to oxidize iron and sulfur (hydrogen sulfide).  You have undoubtedly seen the results that it produces by eradication of the iron and sulfur completely.  People are often amazed when water containing high levels of hydrogen sulfide is completely free of the nasty odor after the catalytic process using hydrogen peroxide as a the oxidizer. For the uninitiated, hydrogen peroxide oxidizes iron and sulfur.  The components of the oxidizing system are a Stenner pump system, the hydrogen peroxide and a backwashing carbon filter that utilizes Catalytic Granular Activated Carbon (CGAC).  The H2O2 is injected just ahead of the CGAC tank and the catalytic reaction occurs literally, on the surface of the CGAC.  That's why it's called catalytic carbon.  It is the catalyst between the H2O2 and the iron or sulfur. At US Water, we were one of the pioneers into H2O2 Catalytic Technology 20 years ago.  For years we have bought large drums and totes of hydrogen peroxide and diluted it to 7% which is the correct percentage used in water treatment.  We no longer do that.  Not only does it involve the EPA and regulations, but the problem with hydrogen peroxide is that it decomposes very rapidly.  It literally turns from H2O2 in H2O in a short period of time.  Obviously this affects performance, as the H2O2 needs to be 7% in order to fully oxidize the iron and sulfur. 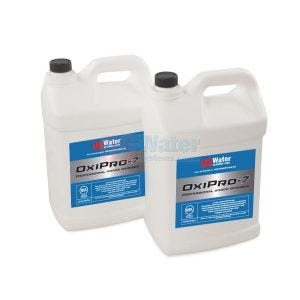 We no longer mix our own, but have it professionally manufactured for us.and it is now stabilized hydrogen peroxide.  We have found in our testing that 7% hydrogen peroxide  when stored in the solution tank for two months can be as low as 3% strength due to its rapid decomposition.  With our new OXi-Pro 7 stabilized hydrogen peroxide, the life span of the H2O2 is approximately 5 times that of regular peroxide. So while OXI-PRO-7 is priced just a little bit more, it actually costs a lot less because it remains stable and enables your hydrogen peroxide system to work at peak efficiency.  It also dramatically extends the life of the catalytic carbon.  If you aren't using OXI-Pro-7  hydrogen peroxide, you are getting less and paying a lot more.
April 29, 2017
1169 view(s)
Did you like this post?
0
0
Comments
Kunal
Sir, i am from india, i have seen that to remove sulphur from water we can use OXI-PRO-7 but i want to ask that, if we want to remove sulphur from molasses can OXI-PRO-7 be used to remove that. and later we can consume the unsulphured molasses. Regards Mr. Kunal
Reply
Mark Timmons
You have to use the OXI-PRO-7 in conjunction with a system like this: https://www.uswatersystems.com/infusion-backwashing-filter-for-iron-sulfur-and-manganese-removal.html It will work with water, but not molasses.
Reply
Susi Lusk
Hi, can you tell me how I can mix this on my own? I have the peroxide pump, and have used the 7%, and 57%,. But my financial status right now is tighter than ever. I was using 5 gal 57% with 5gal distilled water. Just seems I can use peroxide and distilled water to achieve the same results. Thinking I can figure the percentage of peroxide on the bottle and correct amount if water to get the same balance. It's just me and I don't go thru it very fast, so I can mix smaller amounts until I can get back to the store chemical. Unless this can work just as well and is cheaper. Can you tell me if I am on the right path,?
Reply
Mark Timmons
There are a few things at work here: 1. I do not believe that you bought 57% H2O2. I believe someone told you that, but it is not possible and totally illegal. 2. Buying H2O2 in bulk is a bad idea because H2O2 decomposes very rapidly. Even if it was 57% (which is wasn't), in a few weeks it degrades to less than half that. 3. You do not dilute 7% H2O2. You feed it straight and our 7% is stabilized so it does not degrade.
Reply
Susi Lusk
Hi. Yes, you are correct, it is only 27%. So if I use 5 gal 27%, and 5 gal distilled water, I'm defeating the purpose. It works well and lasts for a couple months. But you are telling me, either percentage does not stay chemically correct for longer than a month? Maybe? Thank you.
Reply
Alice Boyer
Is it safe to mix this with water - by half - and use it as a mouth rinse and cleaner for veggies - a quick rinse in diluted water? I cannot find peroxide anywhere and I am homebound and I am desperate for something to use to keep my mouth clean. Is there anything else about this I need to know? I know you can't say too much about stuff but can I dilute it and use it for general purposes?
Reply
Mark Timmons
I cannot guarantee the veracity of what you are doing but cutting H2O 2 with RO or distilled water 1:1 will yield 3.5% strength peroxide. You can use it for that be I cannot guarantee it will kill all bacteria. The longer the contact time, the more likely it is.
Reply
Jackie
can i pour OxiPro-7 into a spray bottle and use to disinfect my home instead of clorox? Or would i need to dilute it?
Reply
Bobby
I currently have a sulfur well water treatment system running chlorine. I would like to convert the standing system to H2O2. What would I need to do to achieve this conversion? Would I need to change anything?
Reply
Mark Timmons
1. You cannot use a diaphragm pump. 2. You need to eliminate any retention tanks. 3. You need to inject just ahead of the backwashing filter. 4. The backwashing filter needs to have catalytic carbon. 5. You need proportional injection.
Reply
Search The Blog
Categories
TOP SELLING PRODUCTS