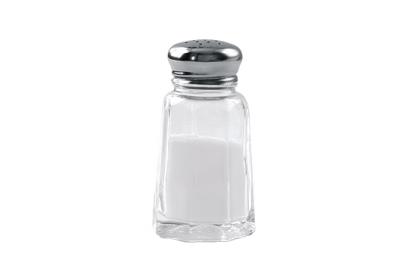 When your sodium levels are low, your kidneys essentially hold on to the sodium. When sodium levels are high, your kidneys excrete the excess in urine. But if for some reason your kidneys can't eliminate enough sodium, the sodium starts to accumulate in your blood. Because sodium attracts and holds water, your blood volume increases. Increased blood volume makes your heart work harder to move more blood through your blood vessels, which increases pressure in your arteries. Such diseases as congestive heart failure, cirrhosis and chronic kidney disease can make it hard for your kidneys to keep sodium levels balanced. Some people's bodies are more sensitive to the effects of sodium than are others. If you're sodium sensitive, you retain sodium more easily, leading to fluid retention and increased blood pressure. If this becomes chronic, it can lead to heart disease, stroke, kidney disease and congestive heart failure.

Unfortunately, most Americans consume too much salt, and most of it is from a diet of highly processed food, not water.   Americans average 3,400 mg of sodium a day, but the Dietary Guidelines recommend limiting sodium to 2,300 mg a day and only 1,500 mg a day if you are over 51 years old. Water softeners do add some sodium to the water.  The amount of sodium a water softener adds to tap water depends on the "hardness" of the water.  Hard water contains large amounts of calcium and magnesium. Most water softeners remove the calcium and magnesium and replace them with sodium. The higher the concentration of calcium and magnesium, the more sodium needed to soften the water. Even so, the added sodium doesn't add up to much. Here’s a rule of thumb:  for every grain per gallon (gpg) of hardness, you add 2 milligrams of sodium.  So, if your water is 15 grains of hardness, you would have 30 mg of sodium in your water, which is well within the Food and Drug Administration's definition of "very low sodium" which is “less than 140 mg”. As you can see, the majority of sodium in the average diet comes from table salt and processed foods.  Therefore, the best way to decrease the sodium in your diet is by cutting back on table salt and processed foods. Issue 3: What are my options? That said, you may still have some sodium in your water, and while it is doubtful drinking softened water would raise your sodium intake much, you could decide to utilize a reverse osmosis system which is remarkable in its’ ability to remove salt from the water.  In most cases it will remove over 95% of the sodium, to say nothing of all the other potential contaminants such as pesticides, THM’s, chlorine and a host of chemicals. Reverse osmosis removes the widest spectrum of contaminants at the lowest cost (typically 2 cents a gallon) than any other water treatment process.  I’m going to suggest that sodium in your water, while undesirable, is not a health threat, but THM’s, chemicals, pharmaceuticals and pesticides are carcinogens or dangerous.  If you want to re-mineralize, there are reverse osmosis systems that even add minerals back to the water.  I hope that helps.
September 13, 2012
Comments
Mike
Hi Mark, 1) Could you provide a table of the pros and cons of salt-based vs. reverse osmosis water systems? 2) What are the best systems for each in a few price points. That is to say, most reliable, best value, lowest maintenance, etc... Regards, Mike <strong> Reply:</strong> Mike, Here's a link to a new page we have: https://www.uswatersystems.com/salt-free-water-conditioners-versus-salt-water-softeners
Reply
Luis Lopez
I was very scared about the salt in water softener after my heart attack. But with your explanation is a little more information to make a decision about the salt in my water softener. You said is not to much salt in the water softener to affect the body. I feel more comfortable with your explanation thanks.
Reply
Mark Timmons
I would still recommend you drink reverse osmosis water.
Reply
Search The Blog
Categories
TOP SELLING PRODUCTS
TOP SELLING PRODUCTS