reverse osmosis RO UV Ultraviolet bacteria Troubleshooting Reverse Osmosis Pulsar Quantum Disinfection Pulsar Quantum Disinfection Claire Technologies Claire-Tech
Posted in: Iron Removal
By Mark Timmons
18 comments
More from this author
Everyday, consumers purchase hundreds of Reverse Osmosis systems for the purpose of protecting themselves and their family from chemicals and contaminants such as arsenic, lead, chlorine, pesticides, and high TDS while mistakenly believing that their new reverse osmosis system will also eliminate bacteria - IT WON'T!  Reverse osmosis is not designed to remove bacteria.  In fact, we now know that bacteria can grow inside the tank and that in some cases, such bacteria can be very detrimental to some individuals.  RO tanks can literally become "incubators" for bacteria.. that's scary! It is now being discovered by medical researchers that immune compromised individuals, children with autism, infants and the elderly may have severe health issues when exposed to the bacteria in a reverse osmosis tank.  This is often referred to as Heterotrophic plate count (HPC), which is a method that measures colony formation on culture media of heterotrophic bacteria in drinking water.  HPC is difficult to remove, even with the use of disinfectants.  In fact, it is impossible to remove them all. So, you have a reverse osmosis system to remove contaminants because you researched and determined that RO removes the largest spectrum of contaminants of any water treatment process and now you find out that it can contain significant levels of bacteria which can be just as detrimental as other contaminants, if not more so.  What can you do? Well, some people have put ultraviolet lights after the RO or on the RO to neutralize the bacteria - UV doesn't actually "kill" bacteria - it just neuters it so that it cannot reproduce.  However, having a UV under a sink after a reverse osmosis system is usually a bad idea.  The UV light heats the water in the chamber and transmits the heat through the small tubing to the point that the water may actually be very hot when it first comes out of the tap.  The heat created by the ultraviolet light embrittles tubing and fittings which can ultimately end in disaster (i.e., a flood under the 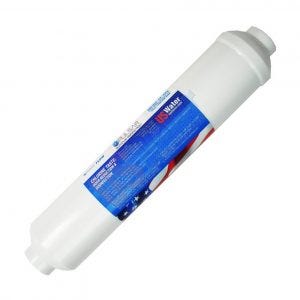