Removing GenX and 1,4 - Dioxane From Water

No salt Naturesoft Saltfree water softener salt-free bacteria water softener whole-house reverse osmosis Troubleshooting Reverse Osmosis Water Softening Water Treatment Water Filter Aquasana Lead Chromium 6 GenX 1 4 - Dioxane
Posted in: Reverse Osmosis, Lead, Water Testing and Analysis, General
By Mark Timmons
29 comments
Chemical contamination or water pollution is something nearly every individual is aware of unless they have been living under a rock. Two chemical contaminants that have been in the news recently have been discovered in an area of Southeastern North Carolina around Cape Fear, Wilmington and surrounding areas.  These are what we call  “emerging contaminants” because they are currently unregulated as scientists are trying to gather more definitive evidence about their effects on humans.

1,4-Dioxane in the Water

1,4-dioxane is an emerging contaminant that has been demonstrated to cause liver and kidney damage to laboratory rats chronically exposed to it in their drinking water.  There have also been studies conducted of workers exposed to the compound through their jobs, but there was no conclusive link to cancer. However, the EPA has determined 1,4-dioxane to be a “probable human carcinogen.” This compound is an industrial solvent found in paint strippers, varnishes, soaps, make-up and antifreeze. It happens to be one of 30 chemicals the EPA has identified as needing to be tracked and studied, with the goal of eventually regulating the ones which pose the greatest risk to public health. This chemical compound is fully miscible in water, meaning that it dissolved almost completely.  This make migration into and through a water supply very quickly. Extended long-term exposure to large amounts of 1,4-dioxane has been shown to cause symptoms of nervous system depression and lesions on the stomach, lungs, liver and kidneys.  The EPA has a Technical Fact Sheet on 1,4 Dioxane.

GenX in the Water

GenX was introduced to replace PFOA ("perfluorooctanoic acid") which is a compound that is used to manufacture Teflon and other such coatings for stain-resistant carpeting, waterproof clothing, and many other products. PFOA, which is also known as C8, was eliminated by DuPont after they were a party to a class-action lawsuit over health and environmental concerns. GenX is also associated with some of the same health problems as PFOA, including cancer and reproductive issues. In 2009, the EPA was aware that GenX was likely dangerous to humans, but the information was ignored and the EPA granted DuPont and Chemours (a company spun-off from DuPont) a consent order to allow them to use GenX.  I mention this because if you think the EPA is truly a watchdog, you are sadly mistaken.  Exceptions like this happen all the time.  One can only speculate why that occurs. GenX mixes easily into water and some call it a "water loving chemical" which means it is very difficult to detect and study.  What we do know is that the body can store this chemical for years making the phrase, "Buy a Filter or Be a Filter" very appropriate. A lot could be written about these contaminants, and in fact there is a multitude of information already. Local governments are pushing the EPA to provide regulatory guidance for these contaminants, but to date, that has not happened.  Frequently, it can take ten, fifteen or twenty years for a newly discovered chemical to become regulated by the EPA

Removal of 1,4-Dioxane From the Water

Not a lot of research has been done on removal of 1,4-dioxane from water supplies, but advanced oxidation processes using hydrogen peroxide with ultraviolet light or ozone is used to treat 1,4-dioxane in wastewater.  Additionally, carbon filtration followed by reverse osmosis and prolonged contact carbon filtration after the RO system will have an imparts at removing 50% or more from the water. At this juncture advanced oxidation processes are not economically viable or reliable enough to be considered for residential use.

Removal of GenX From the Water

Much like 1,4-Dioxane, more research is needs to be done on the removal of GenX from the water, although Granular Activated Carbon and Reverse Osmosis have been demonstrated to be effective at considerable reduction of the contaminant.

I look at every aspect of water contamination, including asking myself the question "What would I do if I had those contaminants in my water supply?"  To me, the answer is perfectly clear.  I would use a technology or technologies that are proven to remove the largest spectrum of contaminants.  Those technologies would include Electro-Absorption, Prolonged Contact Granular Activated Carbon and reverse osmosis.  Many chemicals such as chlorine and chloramine can vaporize from the water to the air and ingestion is not the prime route of human contamination.  Skin absorption and vaporization are also major concerns.  You can wait for the government to rectify the problem... 10, 15, even 20 years... or you can take charge of the problem for your own home.  The technology exists to solve these problems and a whole lot more, right now.  Typically, a whole house water treatment plant like the  system pictured below costs under $10,000.  This is your water we are talking about... what are you waiting for?

Removes the largest spectrum of contaminants of any water treatment process. 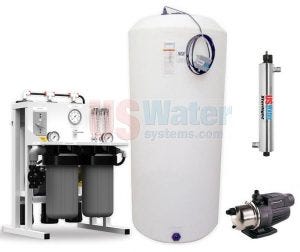