reverse osmosis RO UV Ultraviolet bacteria whole-house reverse osmosis Troubleshooting Reverse Osmosis Water Treatment Water Filter filtration Microcystin Anti-Microibial
Posted in: Reverse Osmosis, Disinfection, Water Filters, Ask a Question, General
By Mark Timmons
8 comments
More from this author
Many people have never heard of microcystin, but what you don't know can harm, or even kill you.  This issue first arose when the Governor of Ohio, John Kasich has declared a state of emergency in Toledo, Ohio  in 2014, after the water treatment plant testing results showed the water contains microcystin.  Also, on May 8, 2017, residents of Summit Lake near Olympia, Washington were advised not to drink or use the water, due to positive tests of toxic algae. Traditional disinfection methods, such as chlorination or boiling is generally not effective at removing or deactivating the bacteria.  Not only would you not want to drink the water, but you would not want to bathe in it or swim in a lake with the toxic algae. 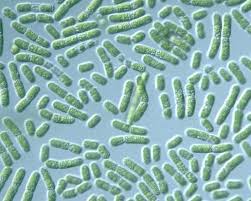 First, let's learn about microcystin.  Toledo, Ohio gets its' water from Lake Erie and during warm, calm weather times, algae blooms in abundance.  The microcystin comes from something called "cyanobacteria" which is a blue-green algae that is considered harmless.  The use of nitrogen based fertilizers and phosphorus enhances the ability of this algae to proliferate.  When they die, some species leave behind a toxin that can last for months. The same situation is occurring in Summit Lake this year. Generally, these blooms are not harmful to humans or other wildlife, however when certain conditions occur, the cyanobacteria can produce microcystin which can cause liver and kidney damage to humans.  It would take high levels to attack the liver, but it is a concern.  Drinking this water could cause dizziness, nausea and diarrhea as well as irritating the skin, eyes and throat.  People can become symptomatic within a few days or even a few hours.    A person experiencing symptoms should consult a doctor. While microcystins are not regulated by the USEPA, you can read more about them at the US EPA's WEBSITE. The bottom line is that when detected, you should abstain from drinking the water.  While Reverse Osmosis can be effective at treating mycrocystin, I would recommend additional filtration to address the issues, such as sediment filtration by step-down filtration, sub-micron filtration and Quantum Disinfection, followed by prolonged contact granular activated carbon (GAC) filtration and finally whole house reverse osmosis or point-of-use reverse osmosis. A treatment system could easily be engineered for just drinking or for an entire household.  One would have to take into consideration other contaminants in the water and design a treatment regimen based upon that and the households needs.  Whole house reverse osmosis systems are very effective in situations such as this... when engineered correctly.
May 13, 2017
Comments
Patrick Colbert
Hello, I just moved to Wilmington NC and found out the public water (and well water) has been contaminated by a chemical called Gen x. My limited understanding of Gen X is that it is similar in composition to teflon and has been introduced into the waterways upstream around Fayetteville. Local news and various sources claim that Reverse Osmosis filtration will filter Gen X and provide Gen X free drinking water. My question: will RO contain the chemical Gen X? I can only imagine the price of a whole house system especially if there are price gouging installers. Any information and suggestions are Greatly appreciated! Thanks for your time! Sincerely, Pat
Reply
Mark Timmons
Yes, a whole house RO will remove Gen X and a whole lot more. Here's a link to typical whole house RO: https://www.uswatersystems.com/us-water-defender-whole-house-ro-system-up-to-3-5-baths.html
Reply
susan
In Toledo, what whole house water filter would you recommend, that does not break the bank? Thanks.
Reply
Mark Timmons
Susan, To be fully protected, I would recommend this: Step 1: https://www.uswatersystems.com/us-water-purely-ez-whole-house-triple-filter-system-city-water-model.html Step 2: https://www.uswatersystems.com/fusion-backwashing-catalytic-carbon-superfilter.html Step 3: https://www.uswatersystems.com/us-water-silecte-quantum-disinfection-system.html Finally, I would use RO for drinking: https://www.uswatersystems.com/drinking-water/reverse-osmosis-systems/under-sink-reverse-osmosis
Reply
Molly Small
Ready to put whole house water system in new home. Need the Most efficient system to rid city water from toxins & impurities Of as many kinds as possible. Where can I find the best water cleaning unit without lots of maintenance.
Reply
Mark Timmons
This system removes the most contaminants of any system on the market today: https://www.uswatersystems.com/us-water-ultimate-whole-house-water-filtration-system.html Let me know your thoughts.
Reply
Robert Moulder
How do you determine when to replace a Quantum Disinfection cartridge that is the final cartridge in a RO system?
Reply
Mark Timmons
We recommend once a year because it also has carbon and carbon should be replaced regularly.
Reply
Search The Blog
Categories
TOP SELLING PRODUCTS