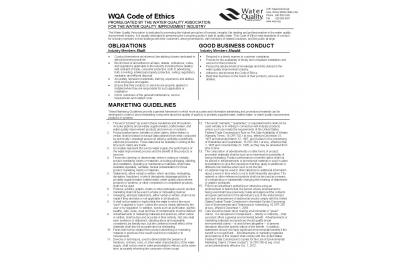 The Water Quality Association (hereafter "WQA") is a trade association which, according to their website... "is the leading voice of the residential, commercial, industrial and small community water treatment industry, representing more than 2,500 manufacturers, suppliers and dealers worldwide." There is an immediate problem in that this "voice" is sometimes blurred and ethics are compromised. Let me explain... On their website (www.WQA.org), the WQA states this under their Code of Ethics:

"WQA is dedicated to promoting the highest principles of honesty, integrity, fair dealing, and professionalism in the water quality improvement industry. It is equally dedicated to preserving the consuming public's right to quality water. This Code of Ethics sets standards of conduct for industry members in their dealings with their customers, among themselves, with members of related industries, and the public at large."

That sounds very good, doesn't it?  In fact, the WQA has a very impressive document called their WQA Code of Ethics which every member receives and is obligated to abide by as part of their membership.  Under "Marketing Guidelines" Section 5. it says:

5. Statements, either verbal or written, which are false, misleading, deceptive, fraudulent, or which deceptively disparage publicly or privately supplied water, bottled water, water quality improvement products or systems, or other competitors or competitive products, shall not be used.

OK, that seems perfectly fine. It gets better:

6. Pictures, exhibits, graphs, charts or other portrayals used in product marketing shall not be used in a false or misleading manner.

7. Sweeping, absolute statements, either verbal or written, shall not be made if they are false or not applicable in all situations.

Again, that is totally realistic.

8. It shall not be stated or implied that the water to which the word" pure" is applied is "pure," unless the word is clearly defined by the user or by regulation. In addition, words such as purification, purifier, healthy, safe, clean, clear and free of contaminants must be defined.

9. Advertisements or marketing materials and practices, either verbal or written, shall be true and accurate in their entirety. Not only shall each sentence or statement, standing alone and separately considered, be literally true, but the combined overall effect of the materials shall also be accurate and not misleading.

What is wrong with not intending to mislead the public? That's how it should be.

10. Facts shall not be omitted from product advertising or marketing material or practices if the result would be to mislead or to misrepresent.

These are all part of a successful Code of Ethics and at US Water Systems, we try and abide by that code.  Now, I will tell you that in water treatment it is sometimes impossible to cover every possible scenario.  Iron is sometimes difficult to remove at certain levels if other "competing contaminants" are present or if it is in a form that is not routine or if the pH is low or high. However, we would not sell a product called an "iron filter" if it did not substantially, in most cases cases, filter the iron.  We would net sell a 5 micron filter if it did not substantially filter out particles larger than 5 microns.  If we sold a filter and called it a 5 micron filter, but in reality, it only filtered out particles larger than 50 microns, we would run afoul of the WQA Code of Ethics. What if a HVAC dealer sold you a furnace that did not actually heat or an air conditioner that did not actually cool?  In common everyday use of the English language, we know that a furnace produces heat and an air conditioner produces cold air.  That is the customary and common usage of those words. What about a "water conditioner? Well, that's a pretty broad term which could mean any number of things.  If it removes chlorine or chemicals, it would be called a conditioner because it changed the condition of the water.  If it removes iron or sulfur or softens the water water, it could also be called a  conditioner.  Any number of water treatment devices can be called water conditioners.  However, what about a water softener?  There are varying definitions of "softener" or "soft water" but most center around something like these: Here is where the WQA falls short in their Code Of Ethics:  There are several companies in the water conditioning industry who are selling devices that they represent are "water softeners," when in fact, they do not soften the water whatsoever!  The WQA goes to great length to make sure the word "pure" is used in it's proper context, but they look the other way when a few companies call their products "water softeners" when the product does no such thing. Let's not dance around this issue.  There are dozens of companies who do this, but if you buy a salt-free water softener from any of them and have a laboratory test the water and if it tests "soft" you will find that it is not soft, in fact! I had a potential customer call us about 6 months ago and he told me the story that he had bought one of these "salt-free water softeners."  After a few months, he called the company and asked if they could test his water, so he sent them a sample of both the hard and the soft water and both tested the same. When he questioned the results, the customer service representative said "Well, it doesn't actually SOFTEN the water it just CONDITIONS it so that no limescale will be formed." The customer said "I bought a saltfree water softener, not a salt free does-not-actually soften the water softener."  He went on to say that he bought it because he thought it would soften the water. It didn't and it won't! Yet, these companies persist in calling their systems "Salt free water softeners."  Maybe they want us to change what the common and ordinary usage of "soft water" means.  The fact of the matter is that if companies who call their systems "salt free water softeners" would rightfully change the name to "salt free water conditioners",  they would lose huge market share.  That's why these companies call the products salt-free water softeners.  They want to trick you into buying their products. They are at odds with the WQA Code of Ethics and at odds with the truth.  How does the WQA allow them to get away with that?  I suspect you have to follow the money. Some people say "Why should you worry about what your competitors do?"  That's a fair question and the answer is this: I'm tired of it and this is the first step to eradicate it from our industry.  TELL THE TRUTH.  Call it a conditioner if it does not soften the water.  Look, this is an Open Forum - if I am wrong and they do soften the water, here's your chance to explain it.  I'd love to hear your explanation.  Otherwise, knock off the deceptive advertising and WQA: You need to do something about this. Maybe the government needs to get involved...
June 26, 2018
Comments
Tim beall
Great artical Mark
Reply
Chris Dobbs
I’m trying to become educated about water filtration systems. I wish I could simply get the name of a whole house system for a 1600 sq ft house in Salinas, Ca that will really filter & “condition” the terrible water in my elderly relative’s home. I just returned a 3 cylinder system to iSpring that didn’t fit the space in the garage by about 1/2 foot.
Reply
Mark Timmons
This system removes the largest spectrum of contaminants of any filtration system and conditions the water by preventing limescale: https://www.uswatersystems.com/us-water-bodyguard-whole-house-water-filtration-system-with-limeblaster-salt-free-conditioner.html
Reply
Search The Blog
Categories
TOP SELLING PRODUCTS
TOP SELLING PRODUCTS