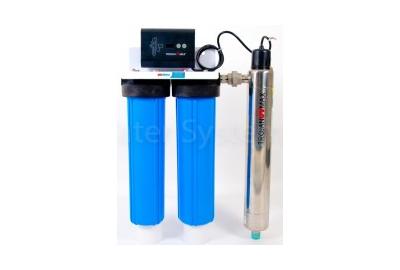 [/caption] used in both air and water purification.  I found it interesting to know that the 1903 Nobel Prize for Medicine was awarded to Niels Finsen for his use of UV against tuberculosis. UV light utilizes short-wavelength ultraviolet radiation that is detrimental to microorganisms. It is effective in destroying the nucleic acids in these organisms so that their DNA is disrupted by the UV radiation. This removes their ability to reproduce and kills them. Turbidity in water makes it difficult for the UV radiation to penetrate the water.  If a water supply has solids, particles, color, turbidity or other organic matter in the water, then you will need some type of sediment filtration before the ultraviolet light so as not to inhibit the transfer of ultraviolet light through the water.   In nearly every application where ultraviolet light is utilized, it is advisable to use "step-down" filtration and have a five and one micron sediment filter BEFORE the ultraviolet disinfection chamber.  This "tightens" the filtration and assures that the water is clean enough to allow the best transfer of ultraviolet light from the UV bulb into the water. Ultraviolet light is generally used as a polishing step to sterilize and disinfect water.  Ultraviolet disinfection is a non-chemical method for destroying microorganisms by altering their genetic material, and rendering them unable to reproduce. The many advantages to ultraviolet light are as follows: Ultraviolet disinfection is particularly effective in a variety applications, including the following: For years, many people have relied on chlorination for the disinfection of water, and while not taking anything away from that technology, there are certain contaminants such as cryptosporidium and giardia cysts that have a hard shell and are resistant to chlorine.  Ultraviolet light is very effective against such species of bacteria and even recommended over and above chlorine. In 1994 around a hundred people died and 400,000 were sickened (depending upon whose figures you want to believe) by cryptosporidium in the city of Milwaukee, Wisconsin.  Milwaukee now also utilizes ultraviolet disinfection. Is ultraviolet light effective?  In a word - YES!  If you have bacteria in your water, whether it be a residence or business, ultraviolet light is the solution IF it is applied properly.  Proper application means that the water is as clean and clear as possible before it is passed through the UV light.  If you have sediment, silt, sand, iron, sulfur, manganese, tannin or high hardness, the ultraviolet light needs to be time final step. If you apply it in that fashion, it will eradicate your bacteria problem.
November 24, 2011
Comments
Search The Blog
Categories
TOP SELLING PRODUCTS
TOP SELLING PRODUCTS