Is Softened Water Bad to Drink? 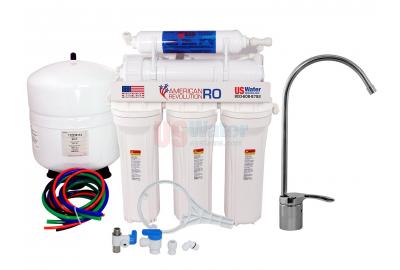 Is Softened Water Bad to Drink?

"My husband is on a no-salt diet - he can't drink soft water." Well, if he's on a no salt diet, he will be dead soon, because you can't live without salt. "I'm on a low sodium diet and soft water makes my blood pressure go up." OK, I can address that, but since I am not a doctor, I shall defer to one of Americans' Respected  Medical Institutions - namely Mayo Clinic.  These are their words, not mine:

Regular tap water contains very little sodium. The amount of sodium a water softener adds to tap water depends on the "hardness" of the water. Hard water contains large amounts of calcium and magnesium. Some water-softening systems replace calcium and magnesium ions with sodium ions. The higher the concentration of calcium and magnesium, the more sodium needed to soften the water. Even so, the added sodium doesn't add up to much. An 8-ounce (237-milliliter) glass of softened water generally contains less than 12.5 milligrams of sodium, which is well within the Food and Drug Administration's definition of "very low sodium." Thus, it's unlikely that sodium in softened water would pose a risk for most healthy people. However, if you're on a very low-sodium diet and you're concerned about the amount of sodium in softened water, you may want to consider a water-purification system that uses potassium chloride instead. Another option is to soften only the hot water and use unsoftened cold water for drinking and cooking. In any case, it's important to keep in mind that the majority of sodium in an average person's diet comes from table salt and processed foods. Thus, the best way to decrease sodium in your diet is by putting away the saltshaker and cutting back on processed foods.

From Sheldon G. Sheps, M.D. of MayoClinic.org So while it is not likely that soft water will increase your sodium intake significantly, I will add two important reasons NOT to drink softened water: Solution:  I drink water that is purified by reverse osmosis, which is the best way known to man to remove the largest spectrum of contaminants from the water.  Since reverse osmosis or RO was developed to desalinate sea water, it effectively removes the sodium as well.  That leaves you with chemical-free, sodium free, healthy, great-tasting water that you can rely on.  To those who say, that the minerals in the water are good for you and you should not remove them - what about the chemicals that aren't good for you?  Listen to this:  WATER IS NOT A SIGNIFICANT SOURCE OF MINERALS!  You get minerals from your food and supplements.  Don't obfuscate the issue.  However, if you are concerned with keeping you water mineralized, we now have re-mineralization filters that do just that after the RO process.  You can have your cake and eat it too!
November 2, 2014
Comments
Radhakrishnan.K.V
Iam an operator working in this field,every time I ask myslf the same question, whether the softwater can be used for drinking purpose. Nobody answered me very clearly. Now I got answer from the famous Institution like..Mayo clinic. Thanks lot..
Reply
Mark Timmons
You are welcome.
Reply
Jeff
I have a carbon upflow filter in line before my soft water system. While this is not the same as RO water, would this remove the poor taste of straight soft water? Also, my kitchen sink cold water is the only faucet in the house with unfiltered and unsoftened water. Now that I have the carbon filter, should I go ahead and filter/soften that sink?
Reply
Mark Timmons
1. The taste of soft water is usually sodium and a carbon filter will not remove that. 2. That's what I did but I recommend drinking reverse osmosis water: https://www.uswatersystems.com/aquapurion-plus-5-stage-reverse-osmosis-system.html
Reply
vincent onyango
Is tap water hard or soft???
Reply
Mark Timmons
In most areas, it is hard?
Reply
Steve
I’m a little shocked that a supposed doctor is saying “omg, chemicals is a contaminant in my water”. Water IS a chemical. Everything is chemicals. Please stop contributing to the dumbing down of the world.
Reply
Mark Timmons
I really am not sure what you are saying. Technically, water is a chemical substance. It has a specific make up of two hydrogen atoms and one oxygen atom. It is used in specific chemical processes and formulas. We can recognize it's chemical formula and make-up. By strict scientific definition, water is a chemical. However, most people do not think of water as a chemical. I would argue that most people think of water as an element. TYhis is probably because water is a natural substance while most "dangerous" chemicals are man-made. I have no idea what your point is...
Reply
Renee
I am looking for a well water filtration system that will remove the hard water contaminates as well as sulfur gas. Will an RO system do these things? We need for the water to be filtered before entering the house to protect our appliances and faucets from corrosion as well as give us pure drinking water. What is recommended to accomplish this?
Reply
Mark Timmons
An RO System WILL NOT do that. You will need this: Step 1: https://www.uswatersystems.com/infusion-backwashing-filter-for-iron-sulfur-and-manganese-removal.html Step 2:https://www.uswatersystems.com/fusion-nlt-professional-grade-metered-water-softener.html Then use this for drinking water: https://www.uswatersystems.com/aquapurion-plus-5-stage-reverse-osmosis-system.html
Reply
Lee Lothian
I just had a new water softener installed and the plumber said that the line going from our 7 stage purification system had to be hooked up to the new water softener which it was previously not. We also have a separate water tap for drinking water only, so I expressed my concern. Since the installation of the new softener was installed the drinking water now burns our throats and tastes awfull, even the dog refuses to drink it and when a dog refuses to drink water it can't be good.
Reply
Mark Timmons
It is always best to install a RO system on soft water as the membrane removes sodium much easier than calcium and magnesium and won't scale the membrane. It sounds to me like the plumber may have swith the lines.
Reply
Dan Pounders
Can i use borax to soften my drinking water
Reply
Mark Timmons
You can use cheesecake, but I would not recommend it.
Reply
JERRY MOORS
Thanks for the info and the laughs from some of your responses. My question is, will the water filter on my frig remove some or most of the salt from my softened water? Thanks!
Reply
Mark Timmons
No chance. The sodium can only be removed with reverse osmosis.
Reply
Tom
Just to be clear, the city water first should go to the softener and then to the filtration system. Then that water can be use for both bathing and drinking. Or should the drinking water be not connected to the softener?
Reply
Mark Timmons
Usually, the filter goes first but I do not know anything about your water.
Reply
Jhon Martin
Nice blog. The efforts you have put in to create the posts are quite interesting. Looking forward to seeing you soon in a new post.
Reply
San Dinh
Mark Timmons, thank your for the insights and info.
Reply
Search The Blog
Categories
TOP SELLING PRODUCTS