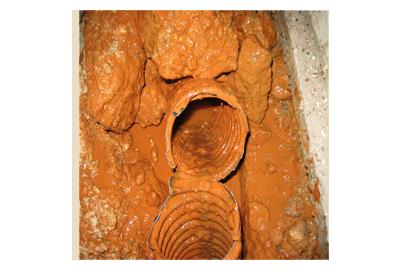 Actually the correct terminology is "Iron Reducing Bacteria" (hereafter called "IRB") and "Sulfate Reducing Bacteria" (hereafter called "SRB").  IRB and SRB are troublesome to many people with well water. Iron Bacteria presents many problems, so an accurate determination of its presence is crucial to appropriate treatment.  Iron Reducing Bacteria (IRB) cause aesthetic problems with the water such as taste, odor and staining of laundry and fixtures.  The most common indication of iron bacteria in the water supply is a reddish-brown or yellowish gelatinous slime in water tanks, faucets, toilet tanks, and plumbing. These nuisance bacteria may cause corrosion to treatment equipment, clog screens and pipes, and have a foul odor. Here are a few of the common problems associated with Iron Reducing Bacteria: TASTES AND ODORS - Iron bacteria often produce unpleasant tastes and odors commonly reported as: "swampy," "oily or petroleum," "cucumber," "sewage," "rotten vegetation," or "musty." The taste or odor may be more noticeable after the water has not been used for some time. Iron bacteria do not produce hydrogen sulfide, the "rotten egg" smell, but do create an environment where sulfur bacteria can grow and produce hydrogen sulfide. COLOR - Iron bacteria will usually cause yellow, orange, red, or brown stains and colored water. It is also sometimes possible to see a rainbow colored, oil-like sheen on the water. RED SLIMY DEPOSITS - Iron bacteria produce a sticky slime which is typically rusty in color, but may be yellow, brown, or grey. A "feathery," or filamentous growth may also be seen, particularly in standing water such as a toilet tank. The characteristics listed above are typical of iron bacteria. However, objectionable stains, tastes, or odors may be due to other causes including iron, sulfate, hydrogen sulfide, manganese, or other nuisance organisms such as sulfur bacteria.

Sulfur-reducing bacteria (SRB) live in oxygen-deficient environments. They break down sulfur compounds, producing hydrogen sulfide gas in the process. Hydrogen sulfide gas is foul-smelling and highly corrosive.  Of the two types, sulfur-reducing bacteria are the more common. The most obvious sign of a sulfur bacteria problem is the distinctive "rotten egg" odor of hydrogen sulfide gas. As with odors caused by iron bacteria, the sulfur smell may only be noticeable when the water hasn't been run for several hours.  In some cases, the odor will only be present when hot water is run; this could indicate that SRBs are building up in the water heater. Blackening of water or dark slime coating the inside of toilet tank may also  indicate a sulfur bacteria problem. Hydrogen sulfide gas produces an offensive "rotten egg" or "sulfur water" odor and taste in the water. In some cases, the odor may be noticeable only when the water is initially turned on or when hot water is used. Heat forces the gas into the air which may cause the odor to be especially offensive in a shower. One of the many troubles with hydrogen sulfide is its strong corrosiveness to metals such as iron, steel, copper and brass. It can tarnish silverware and discolor copper and brass utensils. Hydrogen sulfide also can cause yellow or black stains on kitchen and bathroom fixtures. Coffee, tea and other beverages made with water containing hydrogen sulfide may be discolored and the appearance and taste of cooked foods can be affected. High concentrations of dissolved hydrogen sulfide also can foul the resin bed of an ion exchange water softener. When a hydrogen sulfide odor occurs in treated water (softened or filtered) and no hydrogen sulfide is detected in the non-treated water, it usually indicates the presence of some form of sulfate-reducing bacteria in the system. Water softeners provide a convenient environment for these bacteria to grow. A "salt-loving" bacteria that uses sulfates as an energy source may produce a black slime inside water softeners. Sulfur-reducing bacteria, which use sulfur as an energy source, are the primary producers of large quantities of hydrogen sulfide. These bacteria chemically change natural sulfates in water to hydrogen sulfide. Sulfur-reducing bacteria live in oxygen-deficient environments such as deep wells, plumbing systems, water softeners and water heaters. These bacteria usually flourish on the hot water side of a water distribution system. Hydrogen sulfide gas also occurs naturally in some groundwater. It is formed from decomposing underground deposits of organic matter such as decaying plant material. It is found in deep or shallow wells and also can enter surface water through springs, although it quickly escapes to the atmosphere. Hydrogen sulfide often is present in wells drilled in shale or sandstone, or near coal or peat deposits or oil fields.  Occasionally, a hot water heater is a source of hydrogen sulfide odor. The magnesium corrosion control rod present in many hot water heaters can chemically reduce naturally occurring sulfates to hydrogen sulfide.  Treating water containing IRB and/or SRB can be easily accomplished, but you must first determine if you have SRB and IRB and in what concentrations. The best method to do this with the BART bacteria test.  You can find it HERE. [caption id="attachment_1280" align="alignleft" width="300"] 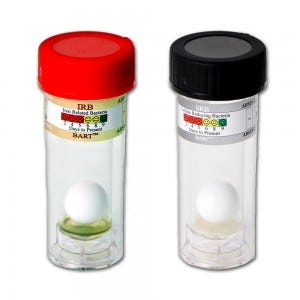