How does a water softener really work? 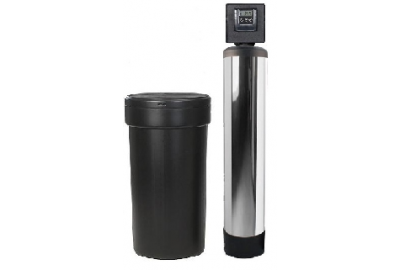 How does a water softener really work?

Water softeners like the Matrixx Water Softener With Smartphone Programming (pictured belwo) use a process called ion exchange.  Every element in your water is made up of ions.  A water softener exchanges scaling ions (calcium and magnesium) with non-scaling ions (sodium).  Ions can be both positively (cation) and negatively (anion) charged.  Water softeners use cation resin to capture scaling ions.

When this happens the water softener must be regenerated.  This is where the brine (salt) tank comes into play.  The salt tank is only used during a regeneration process.  When a water softener regenerates it is flushing the calcium and magnesium ions out of the pressure tank where the media has collected them.  Typically there is a backwash cycle first that will flush all sediment and precipitated ions out of the pressure tank.  Once that process is complete the next cycle is the “brine draw” cycle.  During this cycle the brine (salt) solution is drawn in the control valve and directed through the media bed at a slow steady rate.

As the salt solution passes through the media the calcium and magnesium ions collected on the media are “exchanged” for sodium ions in the brine solution.  Salt is made up of sodium and chloride.  The sodium is collected on the media, and the chloride is flushed to the drain with the calcium and magnesium ions that have been released from the media.  Once the “brine draw” cycle is complete, the control valve rinses the media to remove the excess salt solution.  The very last cycle is the “brine fill” cycle.  During this cycle water is directed back to the salt tank to make up a concentrated salt solution for the next regeneration.

The most obvious sign of a problem is the way the water feels but the most common cause is the salt solution is not being used properly.  This can be because of improper settings or improper sizing, but most of the time it is because there is a clog in the brine draw system.  The most common indicator is that the salt tank is overfilling with water.  This is because the brine system is clogged or not working, so the salt solution isn’t pulled into the cation media pressure tank.

Then when the system goes to “brine fill” the water level in the salt tank continues to rise because no water is ever being removed.  If this happens the most common cause is the tubing from the salt tank to the control valve is loose and sucking air in instead of the salt solution.  90% of the time this line is the cause of water softener failure.  However, on water feed systems with high levels of sediment or iron the cause may be clogging from these elements.  If you have high sediment or iron, they should be removed before the water enters the softener with a 5 micron sediment filter, such as our Magna Filter.

So if the water isn’t soft, check the water level in the salt tank.  If it is overfull, you most likely have a loose brine tube or a clog.  Once that is fixed the system will regenerate properly and the soft water will return.  This is not intended to make you an expert.  It is to help you understand the process.  If you want to know more about the operation feel free to give me a call at 1-800-608-8792.

Tip:  Whenever you have a problem and the water softener hasn’t been regenerating properly, it is recommended that you regenerate your softener 2-3 times back to back once the water softener is repaired.  Typically you won’t know how may gallons of water has passed through the softener untreated so we regenerate a few times in a row to ensure we are back to “ground zero”.

September 2, 2019
Comments
Braden Bills
I want to make sure that my home doesn't have hard water. It makes sense that getting a water softener would help! It's interesting that they help exchange out chemicals in the hard water to make it softer. That's definitely worth getting.
Reply
Mark Timmons
Great idea!
Reply
Erich
Hi - we're loving our Matrix water softener and charcoal filter! Had um for about 8 months. I'm thinking about trying potassium chloride instead of regular salt. I know the KCl costs more, but is there just a 1 to 1 swap? Would I be using the same amount of KCl as I'm now using NaCl? I read on-line that it takes more KCl. Thanks very much. Erich
Reply
Mark Timmons
I would recommend shortening your capacity by about 10%. As an example, if you are regenerating every 1,000 gallons, lower it to 900. Potassium is a little less efficient than sodium.
Reply
Search The Blog
Categories
TOP SELLING PRODUCTS
TOP SELLING PRODUCTS