Have You Ever Been Tricked into Buying a Water Softener? 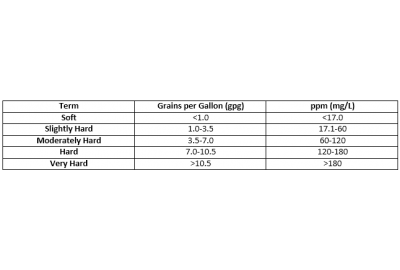 Have You Ever Been Tricked into Buying a Water Softener?

Before I continue, let's establish what a water softener actually does. The Water Quality Association (WQA) is the foremost authority on water quality issues in the USA and is leading the charge to eliminate false and misleading claims about water quality. On their website (www.WQA.org ) they have this:

Scale deposits are a typical indicator of hard water.

Hard water is a common quality of water which contains dissolved compounds of calcium and magnesium and, sometimes, other divalent and trivalent metallic elements.

The term hardness was originally applied to waters that were hard to wash in, referring to the soap wasting properties of hard water. Hardness prevents soap from lathering by causing the development of an insoluble curdy precipitate in the water; hardness typically causes the buildup of hardness scale (such as seen in cooking pans). Dissolved calcium and magnesium salts are primarily responsible for most scaling in pipes and water heaters and cause numerous problems in laundry, kitchen, and bath. Hardness is usually expressed in grains per gallon (or ppm) as calcium carbonate equivalent.

The degree of hardness standard as established by the American Society of Agricultural Engineers (S-339) and the Water Quality Association (WQA) is listed in the table below.

So, it's really simple, for water to be "soft" it must be less than 1.0 Grains Per Gallon or less than 17.0 Parts Per million or mg/l. That's it! At US Water Systems we sell hundreds of products, most of which do not soften water, but we call them what they are: water filters, water conditioners, disinfection systems and so forth. We do sell water softeners and we call them water "softeners" because they actually do what they say: They "soften" the water to below the threshold of what is considered to be "soft water. But, we do not sell products that do not soften the water as defined by the WQA and call them water softeners. That would be a lie. That would be deceptive to consumers and parties who engage in that behavior are defined as charlatans.

However, many other companies do. Vocabulary.com defines charlatan this way:

A charlatan is a quack, a person who is trying to deceive you with false claims. Beware of charlatans who try to sell you access to the fountain of youth or to a Ponzi scheme disguised as an exclusive investment fund.

A charlatan is one who pretends to possess knowledge he or she lacks. From the 16th century Italian ciarlatano "a quack," the usage of charlatanhas not shifted much.

Other words for charlatan are imposter, cheat, or pretender.

Charlatans are marked by the elaborate schemes they cook up. Russian playwright Anton Chekhov said, "No psychologist should pretend to understand what he does not understand. Only fools and charlatansknow everything and understand nothing."

There are many companies in the waster treatment industry who are ethical and call their products what they are. Instead of calling a product a salt free water "softener" they call them salt free "conditioners." Companies like Watts, Aquasana, Culligan and any number of other ethical companies do not lie and say that have a "salt-free water softener" which does not soften the water.

However, then there are companies like NuvoH2o, Pelican Water, Lifesource Water Systems, Tier 1 Water, and others who claim to have a "salt-free softeners" but in fact, they do not soften the water. That begs the question "Why do they call them water softeners?" It's simple: They fool a lot of people into buying their products.

Someone asked me: "Aren't you afraid they might sue you?" My answer is "The truth is an absolute defense." The truth isn't on their side. I can prove unequivocally that their salt-free water softeners do not soften the water. All I am asking is that they stop trying to trick people into buying their products. Just call them what they are: They are not water "softeners." They are water "conditioners."

By January 1, 2020, the Water Quality Association is going to expel members who keep up this deception. That's a move worthy of praise. My only questions is: "If it's a lie in 2020, why not now?" Now, it's up to consumers to weigh in on this. If you have been deceived into buying a salt-free water softener that doesn't actually soften the water, demand your money back and file a complaint with your State Attorney General.