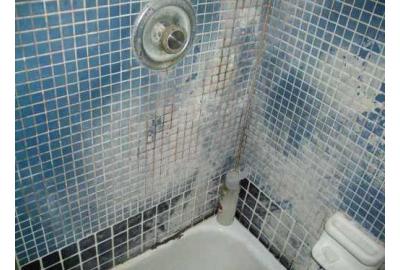 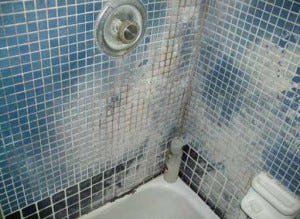 While you would think that soap scum would dissolve easily in water, it can actually be a serious problem for your drains, because water that is hard (contains significant amounts of calcium and magnesium) reacts with the soap to form an insoluble curd which lodges in pipes.  Soap scum is a common source of clogs in bathtub drain systems. While it is not solid, it can solidify after it goes down the drain, gradually building up on your drain's walls. As it does this, it can also stick to anything else passing through your drain, such as hair, making your other potential clogs into real clogs more quickly. Soap scum cannot be eliminated by anything but a salt-based water softener, which removes the calcium and magnesium (hard minerals) and replaces them with sodium (a soft mineral), or a whole-house reverse osmosis system which rejects the calcium and magnesium.  Calcium and magnesium react with soap and form curd and soap scum.  No salt-less or salt-free water conditioner can stop this from happening.  Oh, I know there are companies that say theirs does and I say, I can ABSOLUTELY prove that it doesn't! Those claims are totally BOGUS! Additionally, the soap and hard water scum sticks to shower walls, fixtures, surfaces and faucets.  Salt-free water conditioners make it much easier to wipe off, but it is still there.   The photo above shows hard water and soap scum laminated to a tile wall.  With a salt-based water softener, this type of thing greatly reduced, if not eliminated.  It will take a lot of "Lime-Away" and/or other chemicals and elbow grease to get it off. Lots of people like salt-free water conditioners, but just understand that you will not use less soap with them like you do with a water softener (about 50% less), and also understand that the soap scum in your water will have a measurable effect on your drains and plugging of them.  Salt free or salt using water softeners - both have their place - Just understand the difference. FYI - US Water sells both salt-based and salt-free conditioners - there is not just one magical cure.  We being in full disclosure and believe that the Truth is all the best policy.
June 10, 2012
Comments
Michael Noel
Could an effecient reverse osmosis house system prevent clogged shower heads ?
Reply
Mark Timmons
Most likely. I would need to see an analysis of your water.
Reply
Search The Blog
Categories
TOP SELLING PRODUCTS
TOP SELLING PRODUCTS