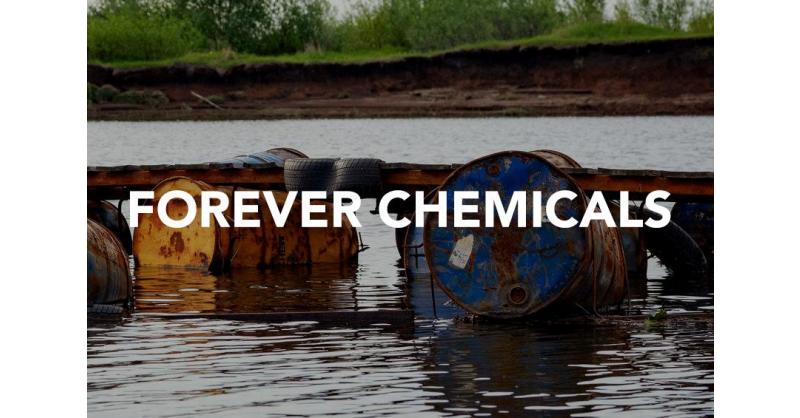 I am not aware of the term “forever chemicals” being used until recently, when it has been used to describe Perfluorinated Chemicals (PFAS) including Perfluorooctane sulfonate (PFOS) and Perfluorooctanoic acid (PFOA) or Perfluorooctanesulfonic Acid found in water supplies. PFOA and PFOS are a group of thousands of synthetic fluorinated organic chemicals.

PFOA and PFOS are part of a larger group of chemicals referred to as perfluoroalkyl substances, or PFASs. PFOA and PFOS have been the most extensively produced and studied of these chemicals. They have been used to make carpets, clothing, fabrics for furniture, paper packaging for food and other materials, like cookware, that are resistant to water, grease and stains. They are also used for firefighting at airfields and in a number of industrial processes.

These chemicals have been used for decades in consumer products and the characteristics that make them useful is also the reason they persist in the environment and can bioaccumulate, or build up, in our bodies and the bodies of wildlife. They literally are “forever chemicals… worse than cockroaches.

The health risks of exposure to these chemicals include developmental effects to fetuses during pregnancy or to breastfed infants, cancer, liver damage, immune system damage, thyroid problems, and many more. The truth is, these are an emerging family of contaminants and researchers have not had enough time to discern the long-term effects of these contaminants. However, we are all pretty certain that long-term exposure to these Forever Chemicals is pretty bad! 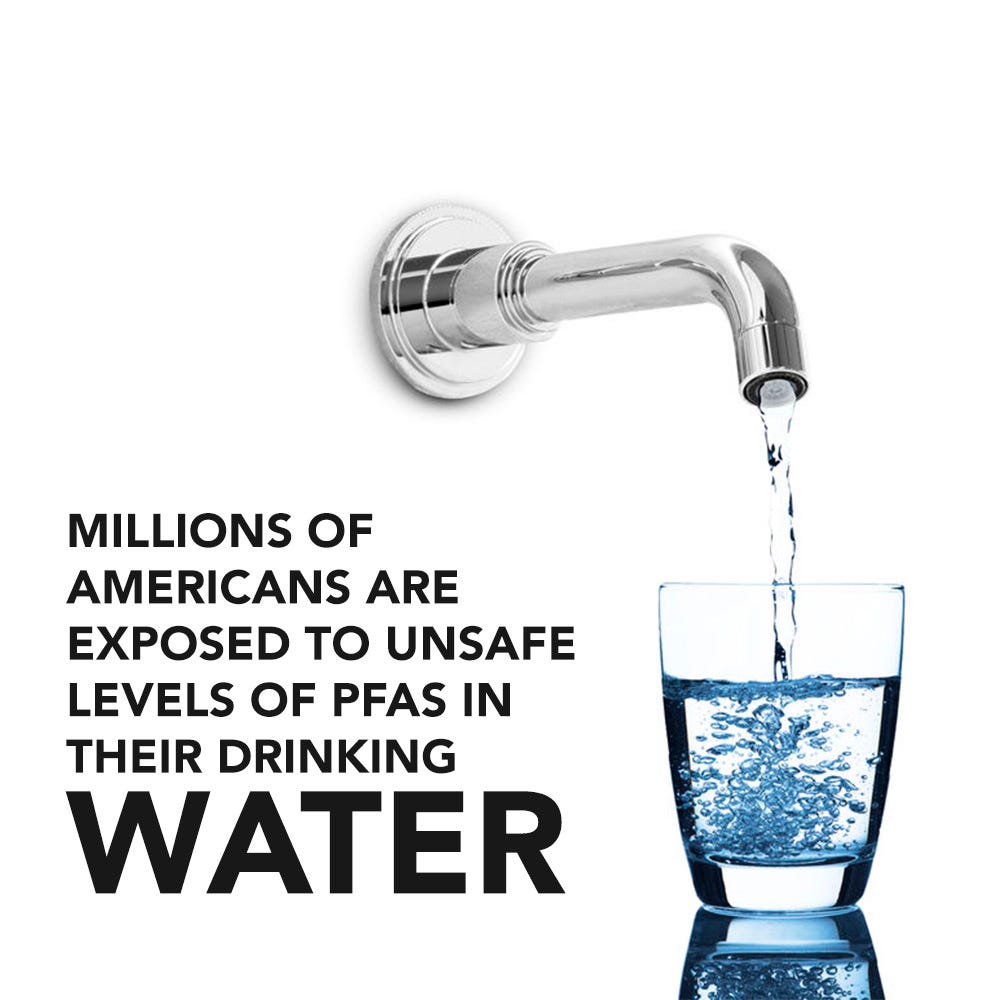 Many people expect a municipality to fix this problem, but the cost to do so on a large-scale basis could be astronomical. The question becomes: Do you want to pay a water bill that is five or ten times higher than what you might currently be paying? That could easily happen if a municipality is forced to remove many of these chemicals from the water. And PFOA’s are just one of hundreds or thousands of potentially harmful chemicals present in may water supplies.

Currently there are no enforceable federal drinking water limits for PFOAs, however, that will likely change in the very near future, but how can a municipality remove substances from the water if they have no target? In May of 2016, the EPA released Lifetime Health Advisories of 0.070 microgram per liter (mg/L) (70 ng/L) for PFOA and PFOS (individually or combined) for exposure from drinking water. These advisory levels are set at concentrations which EPA is certain are protective for the most sensitive individuals against reproductive and developmental impacts with a margin of safety.

The EPA has identified PFOAs as an emerging contaminant because they have a pathway to enter the environment, may pose a human health or environmental risk, and do not have federal regulatory standards. In addition, individual states have begun to develop state PFOA guidelines for monitoring and reducing PFOAs in the environment. There is however, much more to lean about these substances and much research needs to be completed to fully understand what levels are safe, as well as the long-term health effects.

How to Remove PFOA and PFOS From the Water

Since there are currently no established Minimum Contaminant Levels (MCL), it seems unlikely that municiplaities will take them out anytime soon. If you are on a well and have the issue, then you are ultimately responsible for the removal of the contaminants. There are several ways to take out PFOA and PFOS: Granular Activated Carbon, Ion Exchange and Reverse Osmosis. We shall discuss all three. 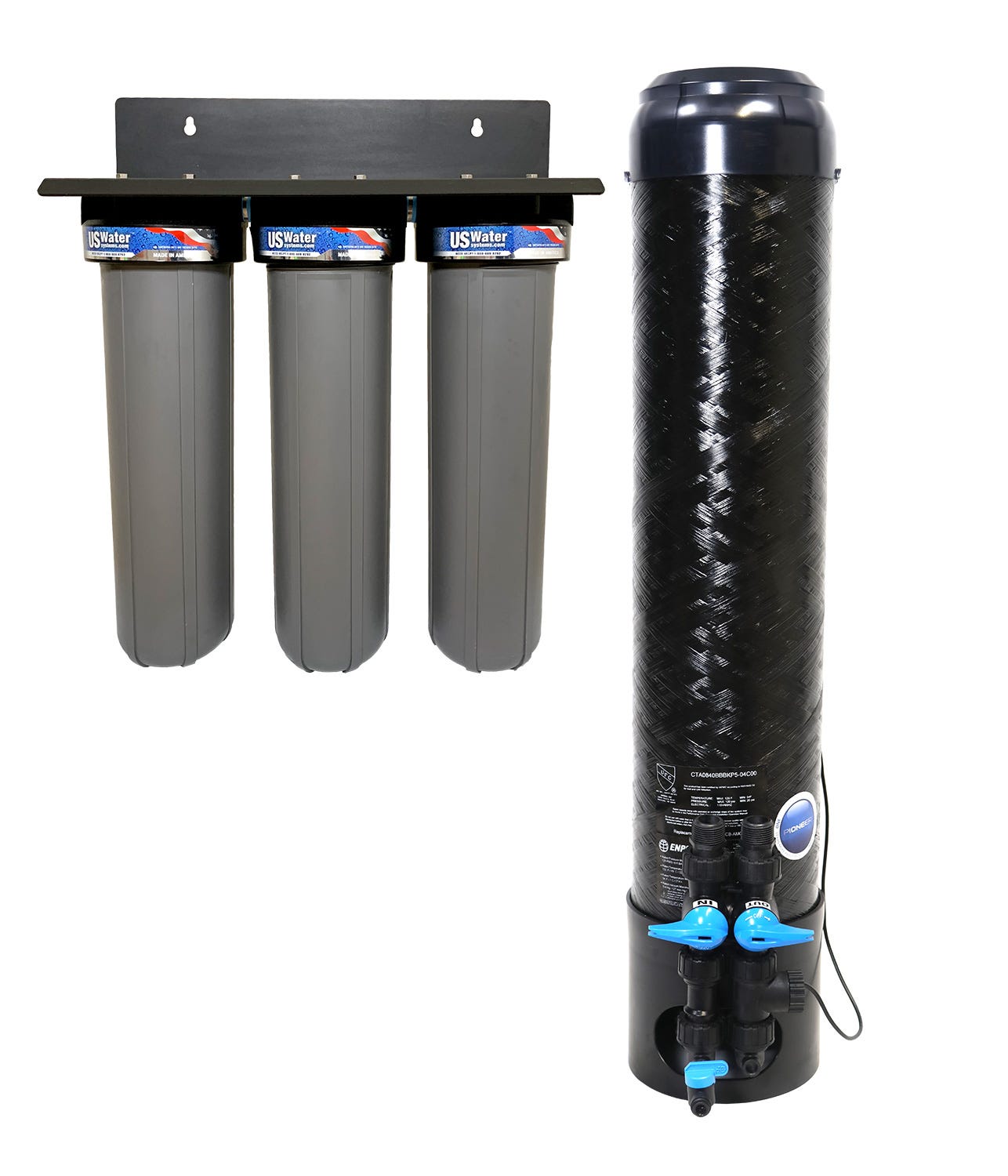 Activated Carbon or GAC as it is called, is the most studied treatment for PFAS removal. GAC is commonly used to adsorb natural organic compounds, taste and odor compounds, and synthetic organic chemicals in drinking water treatment systems. Adsorption is both the physical and chemical process of accumulating a substance, such as PFAS, at the interface between liquid and solids phases. GAC is an effective adsorbent because it is a highly porous material and provides a large surface area to which contaminants may adsorb. It is made from organic materials with high carbon contents such as wood, lignite, and coal; and is often used in granular form.

GAC has been shown it is effective at removing PFAS from drinking water when it is used in a flow through filter after the particulates have already been removed. GAC can be close to 100 percent effective for a period of time, depending on the type of carbon used, the depth of the bed of carbon, flow rate of the water, the specific PFAS you need to remove, temperature, and the degree and type of organic matter as well as other contaminants, or constituents, in the water.

GAC works well on longer-chain PFAS like PFOA and PFOS, but shorter chain PFAS like Perfluorobutanesulfonic acid (PFBS) and Perfluorobutyrate (PFBA) do not adsorb as well, so it depends upon the type of PFAS. One way of removing these compounds is with our US Water Systems Pioneer Whole-House System (pictured to the right). It removesPFOA and PFOS, as well as lead abd cysts from your water supply.

This system has been tested and third-party certified as required in the NSF/ANSI P473 standard for PFOA/PFOS, along with NSF/ANSI 53 standard for the reduction of lead and cysts. The replacement filters are for this are very expensive, and to minimize replacement, the US Water Systems Pioneer Filter system includes a Triple Step-Down Filter System. It has a 5 Micron Filter, followed by a 1 Micron Filter, and finally a 0.5 Micron Filter. The Pioneer Cartridge is 0.5 Microns, but we want to use it as a PFOA/PFOS Filter Only. The sediment will cause it to fail prematurely, so we eliminate it before the Pioneer cartridge. This greatly increases filter life (and lowers the cost to you). Additionally, the Triple Step-Down Filters are of a Double O-Ring Design which assures 100% filtration and eliminates bypass. 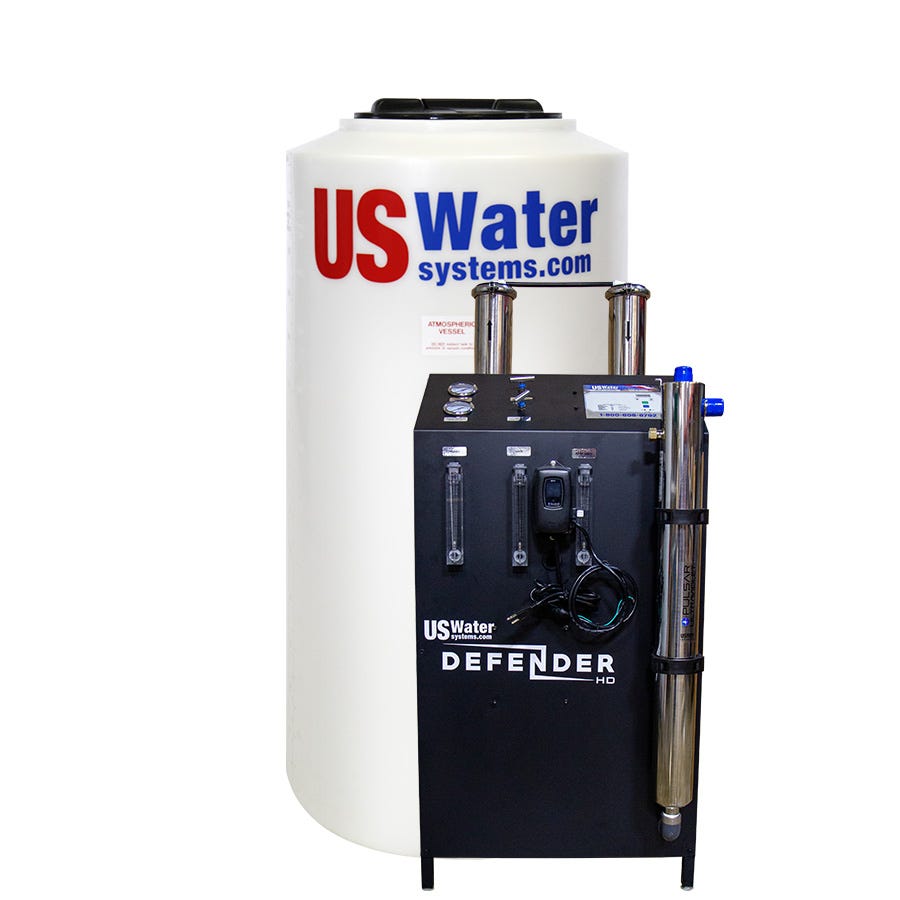 Reverse osmosis (“RO”) systems have been extremely effective at removing PFAS. Research shows that these types of systems are typically more than 90 percent effective at removing a wide range of PFAS, including shorter chain PFAS. This technology is best suited as a point of use technology for a homeowner, since the volume of water being treated is much smaller and the waste stream could be disposed of more easily with less cause for concern.

The most efficient systems only waste one gallon for every four gallons made so efficiency is paramount. A whole house reverse osmosis systems such as the US Water Systems Defender Series is extremely efficient and highly effective at removing PFOA and PFOS and is easy to install and maintain. In addition to removing these forever chemicals, reverse osmosis removes the widest spectrum of contaminants of amy water treatment process, so not only do you remove the PFOA and PFOS, but you also remove hundreds or thousands of other potentially deadly substances.

Ion exchange resins are like tiny powerful magnets that attract and hold the contaminated materials from passing through the water system. Negatively charged ions of PFAS are attracted to the positively charged anion resins and has shown a high capacity for many PFAS. However, it is typically more expensive than GAC. While I feel that this technology could be viable in the future, it is something we do not recommend at this juncture.

In some cases, we have utilized both Reverse Osmosis and the Pioneer PFOA and PFOS contaminant removal system, but just testing for PFOA or PFOS is only the start. To choose the proper treatment and to be successful at it, a good detailed water analysis is paramount. We recommend a test such as our US Water Systems Professional Lab Water Test. We have partnerd with a large laboratory who perform these tests for us at a minimal cost. Once we know what is in the water and at what levels, we can design a systems rooted in sound science and guarantee the results.