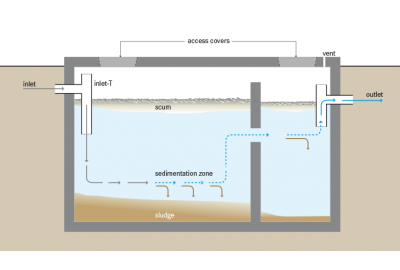 Can I Use a Water Softener With a Septic Tank?

Frequently, potential customers contact us and say “I can’t have a water softener because I have a septic tank.”  That statement, in and of itself is completely untrue. It is simply not true that water softener regeneration discharges pose a problem to septic systems or to the leach field. Studies have shown that water softener regeneration waste water not only does not interfere with the septic tank system drain field soil percolation, but, actually could, improve soil percolation particularly in fine-textured soils. The Water Quality Research Foundation commissioned Virginia Polytechnic Institute and State University to conduct independent and scientific testing on the issue in 2012. The result is an official report, “Changes in Septic Tank Efﬂuent Due to Water Softener Use.” This 18-month study, included many site visits and the work of numerous trained experts from WQA, NOWRA, regulators and NSF International. According to the authors of the study:

“The data indicate that the use of efficiently operated water softeners improves septic tank performance, while the use of very inefficient home softeners may have a negative effect on solids discharge to the drain field and the level of impact will depend on the level of hardness in the water, whether the regeneration waste is discharged to the septic tank, and the amount of excess sodium present in regeneration wastes.”

The addition of sodium to a septic system by use of soft water actually has beneficial effects on the digestion of wastes by bacteria. The volume of wastes from water softeners (about 50 gallons per regeneration) are added to the septic tank slowly and are not of sufficient volume to cause any deleterious hydraulic load problems. In fact, they are lower in volume and rate of addition than wastes from automatic washers. And the calcium and magnesium in softener regeneration wastes contribute to good air and water movement (improved soil percolation) through the septic system drainage field. The University of Wisconsin and the National Sanitation Foundation reports clearly indicate that when the sodium content from the softener regeneration cycle is discharged into the soil via a septic system along with other salts such as calcium, magnesium, and iron the result is an improvement in the soil's percolation rather than a detriment There are other advantages that are directly related to the use of ion exchange softened water when the hardness minerals calcium and magnesium are removed by softening. The homeowner uses less soap -- studies have indicated as much as 50% to 75% less. There is also less biodegradable products discharged into the system which relieves the loading on the system. It is a known fact that many homeowners do not maintain a septic system properly; not pumping the system at proper intervals allows detergent solids, as well as other solids, to be carried over into the drainage area causing clogging. Also, by having soft water or stain-free water available, the homeowner's fabrics are cleaner, and the amount of water used can be reduced. This reduces the loading on the septic system a great deal.

Researchers also found that the additional amount of water discharged to a treatment tank during the regeneration process had no negative impact on septic tanks, especially when used in moderation.  Moderation means that you should have a high effciency water softener that is easily programmable so that it can be calibrated to use the least amount of salt and waste water.  Researchers found that the water softener regeneration brine did not reduce the percolation rate of water in the absorption field of a normally operating septic system, but why not be as efficient as possible? Much of this information is available from The Water Quality Association (WQA) is you are seeking even more knowledge of this subject. US Water Systems recommends the Matrixx Water Softener which is powered by our Waterlogix Bluetooth app.  It can regenerate on minimal salt and waste a very small amount of water, due to it's ease of programming. https://www.youtube.com/watch?v=aLnmw_hg7GM Septic Tank Photo Credit; Compliments of Wikipdia
November 14, 2018
Comments
Search The Blog
Categories
TOP SELLING PRODUCTS
TOP SELLING PRODUCTS