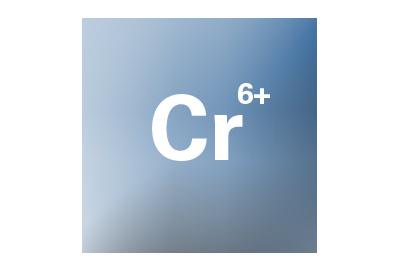 Posted in: Reverse Osmosis
By Mark Timmons
No comments
More from this author 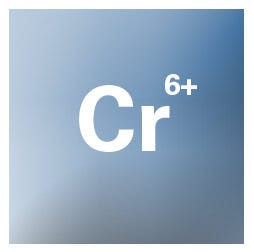 ent chromium, which is also called hex chrome or chromium-6, is a metal used in a number of industrial processes including chrome plating, steel production, paint and cement making.  Hex chrome is a potent human carcinogen and people are exposed to it by breathing contaminated air and, as in the case made famous by Erin Brockovich, drinking contaminated tap water. Health concerns - Inhaling hexavalent chromium over an extended period of time causes lung and nasal cancers. It also irritates the airways, causes nasal and skin ulcerations and lesions, perforation of the nasal septum, asthma, dermatitis and other allergic reactions. Ingesting hexavalent chromium causes stomach and intestinal damage and can lead to cancer.  In lab animals, hexavalent chromium damages sperm and male reproductive systems, and in some cases, has damaged the developing fetus. Hexavalent chromium is a metal used in industrial processes such as chrome plating (which puts a shiny, anti-corrosive finish on wheels or plumbing fixtures, for example), steel production, metal working, tanning, paint and pigment manufacturing, glass-making and cement manufacturing. Until recently, chromium compounds, including hex chrome, were widely used as a wood preservative in pressure-treated wood. In monitoring conducted by the California Department of Public Health, nearly 40 percent of drinking water sources tested in California contained unsafe levels of hex chrome. The Environmental Working Group released a report December 20, 2010 indicating that millions of Americans are regularly drinking hexavalent chromium. The group -- whose study was first reported in a story Sunday by the Washington Post's Lyndsey Layton -- tested water from 35 U.S. cities and found that samples from 31 cities contained hexavalent chromium. The highest concentrations were found in Norman, Okla.; Honolulu; and Riverside, Calif. The substance had been a widely used industrial chemical for decades and has evidently leached into the groundwater in many areas. The EWG report states: "Despite mounting evidence of the contaminant's toxic effects, the U.S. Environmental Protection Agency (EPA) has not set a legal limit for chromium-6 in tap water and does not require water utilities to test for it. Hexavalent chromium is commonly discharged from steel and pulp mills as well as metal-plating and leather-tanning facilities. It can also pollute water through erosion of natural deposits. "The authoritative National Toxicology Program (NTP) of the U.S. Department of Health and Human Services has said that chromium-6 in drinking water shows 'clear evidence of carcinogenic activity' in laboratory animals, increasing the risk of gastrointestinal tumors. Just last October, a draft review by the EPA similarly found that ingesting the chemical in tap water is 'likely to be carcinogenic to humans.' Other health risks associated with exposure include liver and kidney damage, anemia and ulcers." Drinking-water supplies all over the country are increasingly tainted by chemicals used in natural gas drilling. And Erin Brockovich, for her part, told the EWG that she's rather astonished to find that hexavalent chromium is still a prospective health threat in so many communities. "It is sometimes difficult to understand why I still have to warn the public about the presence of hexavalent chromium in drinking water 23 years after my colleagues and I first sounded the alarm," Brockovich told the EWG. "This report underscores, in fairly stark terms, the health risks that millions of Americans still face because of water contamination." The list of cities found to have hexavalent chromium in the municipal water supplies are as follows: • Honolulu, HI • Bend, OR • Sacramento, CA • San Jose, CA • Los Angeles, CA • Riverside, CA • Las Vegas, NV • Salt Lake City, UT • Scottsdale, AZ • Phoenix, AZ • Albuquerque, NM • Norman, OK • Omaha, NE • Madison, WI • Milwaukee, WI • Chicago, IL • Ann Arbor, MI • Louisville, KY • Cincinnati, OH • Buffalo, NY • Syracuse, NY • Pittsburgh, PA • Villanova, PA • Boston, MA • New Haven, CT • New York, NY • Bethesda, MD • Washington, DC • Atlanta, GA • Tallahassee, FL • Miami, FL If your city is not on that list, it doesn't mean that you can't have hexavalent chromium in your water supply.  The best way to protect yourself and your family from hexavalent chromium, as well as over 35,000 other potential "toxic cocktails" is with a good Reverse Osmosis system.   Reverse Osmosis Systems are effective at removing Hex Chrome from the water supply as well as many other chemicals, pesticides and chlorine which is not good for you. Let me put it anther way - IT'S BAD FOR YOU!
March 25, 2011
Comments
Search The Blog
Categories
TOP SELLING PRODUCTS
TOP SELLING PRODUCTS