Can I use a water softener to remove iron? 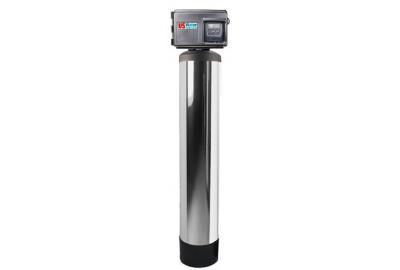 Can I use a water softener to remove iron?

Iron is a common problem with well water applications.  In the past, many of these applications used a water softener exclusively for iron and hardness treatment.  In some cases this works fine but in other cases a water softener is just not adequate.  Also, in applications where a softener is removing both iron and hardness, the softener resin life is greatly reduced.  Iron will eventually coat and clog the resin matrix and prevent it from working properly.  Typically, this is discovered when there is iron staining occurring but the water tests soft.  Iron will always show up (come back) first before hardness when there is a failure with the softener operation. The problem is usually caused by precipitated (non- soluble) iron that plugs up the internal parts of the water softener or the resin is coated and clogged with iron, and there is no ion exchange occurring.  If the internal parts are plugged there is a very good chance that they will continue to plug again once they are cleaned.  Older iron systems that used potassium permanganate to regenerate had re-occurring problems with the internal parts clogging.  This was a very labor intensive and messy fix. 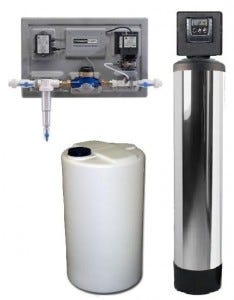 If you know you have iron,I would recommend an iron filter to remove it.  A water softener will work much better and longer if there is iron treatment before it in the treatment system. US Water Systems has several iron treatment methods.  The method depends on the water chemistry and the level of iron to be removed.  I have broken this down into three categories. Robust The most robust system US Water offers is the Fusion Oxi-Gen iron and sulfur removal system.  These systems utilize hydrogen peroxide to oxidize the iron.  After peroxide (H2O2) is injected into the water stream, the water is directed to a catalytic carbon filter to remove the oxidized iron, manganese or sulfur.  These systems can treat very high levels of iron, sulfur and manganese.  Typically in a 4 person household 30 gallons H2O2 will last 8-12 months with a cost of around $350 annually.  These systems are guaranteed to remove the iron.  In 17 years, we have not seen an application where these systems do not work.  Because the oxidizer (peroxide or H2O2) is similar to water (H2O), it is safer than chlorine and other oxidizers.  When peroxide is injected into the water the extra oxygen molecule oxidizes the iron and the by product is H2O.  So the chemistry neutralizes and diverts to water (H2O).  The catalytic carbon then captures the oxidized iron and removes it from the water source. Mid-Level Iron