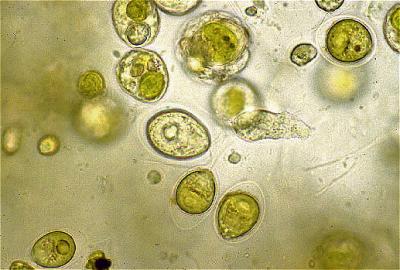 Posted in: Disinfection
By Mark Timmons
1 comment
More from this author

I have well water and have had several negative tests for coliform or e-coli bacteria.  I have shock chlorinated the well, but it keeps coming back.  What should I do? 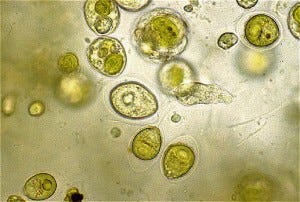 Total coliform, fecal coliform, and E. coli are all indicators of drinking water quality. The total coliform group is a large collection of different kinds of bacteria. Fecal coliforms are types of total coliform that mostly exist in feces. E. coli is a sub-group of fecal coliform. When a water sample is sent to a lab, it is tested for total coliform. If total coliform is present, the sample will also be tested for either fecal coliform or E. coli, depending on the lab testing method.
Total coliform bacteria are commonly found in the environment (e.g., soil or vegetation) and are generally harmless. If only total coliform bacteria are detected in drinking water, the source is probably environmental. Fecal contamination is not likely. However, if environmental contamination can enter the system, there may also be a way for pathogens to enter the system. Therefore, it is important to find the source and resolve the problem.
Fecal coliform bacteria are a sub-group of total coliform bacteria. They appear in great quantities in the intestines and feces of people and animals. The presence of fecal coliform in a drinking water sample often indicates recent fecal contamination » meaning that there is a greater risk that pathogens are present than if only total coliform bacteria is detected.
E. coli is a sub-group of the fecal coliform group. Most E. coli bacteria are harmless and are found in great quantities in the intestines of people and warm-blooded animals. Some strains, however, can cause illness. The presence of E. coli in a drinking water sample almost always indicates recent fecal contamination » meaning there is a greater risk that pathogens are present.
A note about E. coli: E. coli outbreaks receive much media coverage. Most outbreaks have been caused by a specific strain of E. coli bacteria known as E. coli O157:H7. When a drinking water sample is reported as "E. coli present" it does not mean that this dangerous strain is present and in fact, it is probably not present. However, it does indicate recent fecal contamination. Boiling or treating contaminated drinking water with a disinfectant destroys all forms of E. coli, including O157:H7.
When coliform bacteria are found, water systems investigate to find out how the contamination got into the water. They collect additional, or "repeat," water samples for testing, and often inspect the entire system. Taking repeat samples helps determine whether an actual problem exists in the system. If any of the repeat samples detect coliform bacteria, the initial findings are considered confirmed.
If total coliform bacteria are confirmed in your drinking water, your water system should be inspected to find and eliminate any possible sources of contamination. Once the source is identified, it can usually be resolved by making system repairs, flushing, shocking the well with chlorine for a short period of time or continuously chlorinating the well.  If you are on a private water supply, we strongly encourage you to protect yourself and your family's health with an ultraviolet disinfection system which renders all type of bacteria harmless.   In my opinion, ultraviolet or UV is the technology of choice to provide bacteria-free water.
UV irradiation can be used for multiple purposes in water treatment, but is primarily employed as a disinfection process that inactivates waterborne pathogens without chemicals. For other applications, UV is used for the removal of organic and inorganic chemicals, including chlorine, chloramines, ozone and Total Organic Carbon (TOC). When combined with oxidants such as ozone or hydrogen peroxide, or semiconductors such as titanium dioxide, UV can be used for the oxidation of refractory chemicals such as chlorinated solvents, taste and odor compounds, and other emerging contaminants.  UV disinfection has been successfully applied worldwide for decades, and has numerous advantages over chemical disinfection methods:
July 16, 2010
Comments
Red
hi,if I use a uv system how can or what would be best to remove minerals prior to uv system? <strong>The Water Doctor Replied:</strong> You can remove minerals by ion exchange (a water softener) or by reverse osmosis, but if the minerals are too high it will foul the reverse osmosis membrane. If you have substantial hardness (minerals) in your water, water softening is the only practical way.
Reply
Search The Blog
Categories
TOP SELLING PRODUCTS
TOP SELLING PRODUCTS