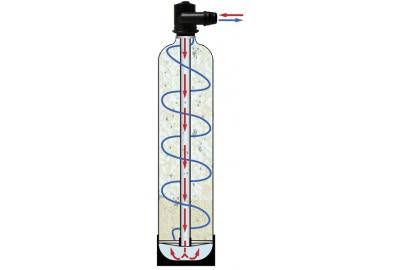 Arizona State University recently completed an Evaluation of Alternatives to Domestic Ion Exchange Water Softeners on April 26, 2011.  An overview of that evaluation can he found HERE.  Mara Wiest, Dr. Peter Fox, Dr. Lee Wontae, HDR, and Tim Thomure, HDR were responsible for the study.  The study objective was to:

"identify credible alternatives to ion exchange water softeners that would provide consumers with the ability to reduce the impacts of hard water without creating the negative salinity impacts."

There were four (4) No-Salt Alternatives tested in this study:

The testing procedure was as follows:

The water quality ranged from 180 mg/l (10.5 gpg) to 250 mg/l (14.6 gpg).   The results were astounding.   While all of the devices were somewhat effective at removing scale,  the TAC (Templated Assisted Crystallization) method was proven to be dramatically superior to any other treatement method.  It consistely removed over 90% of hard water scale. The devices where wires were wrapped around pipes did work to some degree, but didn't even reach a level of being 50% effective! Would you want a salt-free water conditioner that is less than 50% effective or something that is nearly 100% effective? The template assisted crystallization (TAC) media is a name associated with nextScale Stop,  Watts One Flow and Scale-Net systems, but in my opinion, Filtersorb SP3 Media, Watts E-Treat Media and Green Wave Media are the same in function while different in nomenclatere.   In my opinion TAC and MEP are one and the same in theory, function and operation. The TAC and MEP devices on the market, use a tank with media inside which gives the calcium and magnesium a "physical matrix" by which they can attach, lose their electrical charge and render them inert.  If you want to prevent scale to any major degree without salt, the TAC and MEP Methods beat the competition HANDS DOWN!

October 21, 2011
Comments
james mark
Where can I find a TAC home unit for sale? Any help would be greatly appreciated. Thank you Jim
Reply
mark
Jim, TAC is like Kleenex- Lots of companies sell the same thing, but there’s only one “Kleenex.” Our MEP is the same process as TAC and independent tests show it works the same. Here’s the link: https://www.uswatersystems.com/systems/salt-free-water-conditioners Let me know if you have more questions.
Reply
Ben Minder
I found and read the ASU report you referred to. That convinced me to replace my salt system with a TAC system. The more I look into the water softener business the more I think it's like the mattress or used car business: a lot of smoke and mirrors and high pressure marketing! You say your MEP is the same process and that fact has been shown to be true by independent tests. Are those independent tests available for review by potential purchasers of your system? Thank you.
Reply
mark
Ben, You are correct about the water softening business, especially when it comes to companies who market only one product. There are lots of smoke and mirrors and high pressure in the water treatment industry. We are not part of that group. We are not a company that sells just one product, like TAC. We have over 5,000 products and one size does not fit all. We provide solutions – we don’t make you fit our solution. Our media is the same as TAC – all you have to do is look at it and read what it does. nextScaleStop considers TAC to be their own private name, but it is actually a process. Template Assisted Crystallization is the same process as Matrix Enable Particulaization, but we don’t call it that because we don’t want the expense of the litigation that they threaten. There really is no independent testing on salt-free systems at this time, which is a really black mark against the water treatment industry. Be careful of what you read. I think we are the most forthcoming company in the business as we tell you exactly what TAC or MEP will or won’t do: <a href="https://www.uswatersystems.com/salt-free-water-conditioners-versus-salt-water-softeners" target="_blank" rel="nofollow">https://www.uswatersystems.com/salt-free-water-conditioners-versus-salt-water-softeners</a>
Reply
Keith Harris
After reviewing the report I am impressed with the lack of scale left behind by the TAC and MEP methods. My question is about personal care. My wife likes what soft water does for her hair, skin, laundry, etc. and I am curious if the same "soft" effects are afforded by TAC or MEP systems?
Reply
Pat
I would like to know if these systems have changed much in the past 2 years - and also why there are no posts after 2013? Lastly, do hotels and other businesses use similar water conditioning systems? If so, which ones, so I could ask them about their satisfaction? Thank you.
Reply
Mark Timmons
Nothing new to report during the past two years except that we have found the systems are more effective with higher amounts of media. Most of our competitors use less media but we have increased our amount of media and improved the performance. We add new post several times a week, so older posts don't get much attention. We have lots of new ones on the subject.
Reply
Nestor
So confused after reading this and the "no salt fact or fiction" report of 2012. RO or TAC is what we are left with since our well water reading is over 140 gpg or over 1300 ppm. The sales rep stated a salt system cannot help us and one of them think we should just have water delivered to us and store it in a large tank and then treat with ion exchange. Please help
Reply
Mark Timmons
A no-saslt system is certainly not the answer and neither is a softener. Once I see the water test, I can tell you how to fix it and guarantee the results.
Reply
steve
I have a private well with a very high iron level .doest system filter out iron.and how long do they last
Reply
Mark Timmons
How much iron? Do you have test?
Reply
Tom
One of my partners was hired by Lufthansa to test saltless systems, I sell them but only if and when the customer insists on one. We try to educate the consumer on the technology and testing that's been done on the different saltless technologies. I have still found salt systems to be much more effective ... we have systems that reduce salt consumption by 70% My company specializes in Nano Water Filtration ... I don't profess to be an expert in water softening systems but I do know chemistry and have yet to find a saltless system that does what they they claim or rather allude to doing.
Reply
yellow pages reverse lookup
You have made som decent points there. I checked on the net for more info abou the issue and founjd most individuals will go long with your views on this website.
Reply
seo
I always spent my half an hour to read this blog's posts all the time along with a mug of coffee.
Reply
Search The Blog
Categories
TOP SELLING PRODUCTS
TOP SELLING PRODUCTS