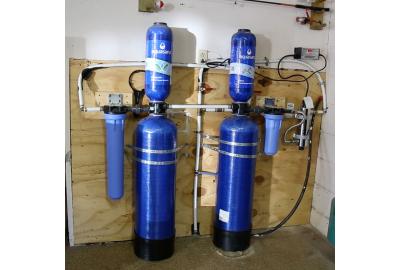 Recently, a prospective customer walked into our US WATER SYSTEMS World Headquarters in Indianapolis, Indiana and said that they had some horrible water problems that they were not able to solve. They proceeded to explain that about six months earlier they had installed the Aquasana Rhino Well Water System and that it seemed to work well for a few months, but then the water comning out of it was worse than the water going into it. They sent the water to Aquasana to be tested and they confirmed his suspicions: It was worse than the water cominng into it.  More about that later.  The tests also confirmed that the water wasn't "soft." He asked them about this because what he bought Aquasana called a "Salt-Free Softener".  The representative he talked to explained to him that while it is called a "softner", it really doesn't "soften" the water, it just helps prevent scale. Then why call it a "softener" if it doesn't "soften" the water?  In his case, he would not have bought it if they had not called it a "softener," so I guess that is the reason. It is pretty apparent that Aquasana calls it a "softener" even though it does not soften the water, is so that they can deceive the customer into buying their product.  They might call it good marketing - I call it not telling tyhe truth!  I don't like to be lied to and I don't like to see consumers lied to.  Long story short:  the customer bought a US Water System designed for well water  and the results have been astounding.  His seven-year-old son said: "This is the best water I've ever had in my life."  From the mouth of babes! 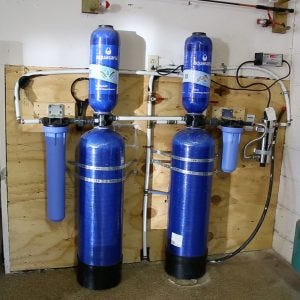 When you look at a picture of an Aquasana Rhino Salt Free system, it looks pretty substantial. However, when you compare it to the system from US Water Systems, you realize how tiny it really is in comparison. The two blue Aquasana tanks are 10" in diameter by 35" high and hold approximately 1 cu/ft of media each, but when we took the units apart, there was not anything close to that amount in them. The two chrome US Water tanks are 13" in diameter by 54" high and hold 2.5 cu/ft of media each. They also backwash, because well water contains lots of things like iron, sulfur, manganese and organics, which have to be oxidized, reduced and  trapped, so that they can be backwashed out.  If not regularly backwashed out, they will accumulate and eventually, the water coming out will be worse than the water coming in, which is excatly what happened in this customers case. 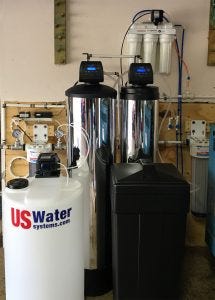 Below are two houses.  One is a "toy" but the other is a real house that can be lived in. If you are an adult, I think you would prefer the real house, not a "toy" house. Toys are fun, but just like a toy house is not a real house, a tiny water treatment system really can't do much for people with bad well water. 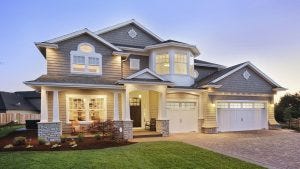 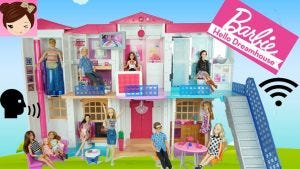 January 13, 2018
Comments
Kelly Cravey
If I buy one of these systems to take out the sulfer and other harmful toxins in my well. How often do I need to buy n change filters?
Reply
Mark Timmons
The carbon typically lasts 5+ years. It would depend upon your water chemistry. We offer an excellent lab water test.
Reply
Walter Clark
Was fooled. Bought the fancy Aquasana system for a 4,000 SF home and the water is still, of course, hard. What do I need now for soft water, and can it be attached to the Aquasana system? Thanks!
Reply
Mark Timmons
I do give Aquasana credit. After putting a lot of pressure on them, they quit calling it a "softener." That said, you can probably use your Aquasana with our system. I would like to know which one you have and how many bathrooms and how many in the family, so I can properly size it.
Reply
Search The Blog
Categories
TOP SELLING PRODUCTS
TOP SELLING PRODUCTS