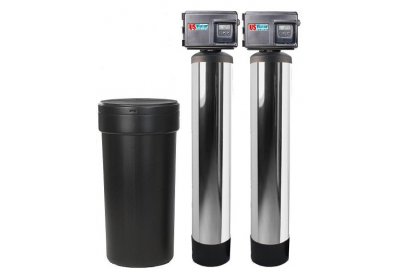 It was about 15 years ago that we started the experimentation of adding air to water to oxidize iron, manganese and sulfur.  We have did this on 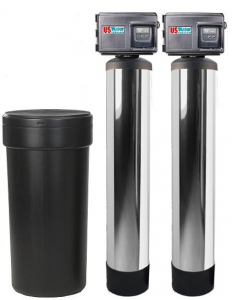 and off many times since then, but it was only recently that we really hit upon a system design that we knew would be economical, sustainable, scalable and reliable.  That new product is called the inFusion chemical-free iron,manganese and sulfur eradication system. It works like this:  We use a water softener-type valve on the filter and at the point of where the water softener would form a suction and suck brine into the tank, we have a screen and check-valve assembly whereby it takes a big gulp of fresh air, which of course, has lots of oxygen, which is a great oxidizer of iron, sulfur and manganese.   Also, in case you didn't get the memo, air is FREE!  This big gulp of air is what we call "air inFusion" which is contained in the top of the filter tank. The inFusion filter has to backwash for a few minutes each night to replenish that air supply.  As you use water, it is drawn into the tank, through the air pocket, and the oxygen in the air oxidizes, the iron, sulfur and manganese, causing it to precipitate out on the surface of the manganese dioxide catalytic granular activated carbon media.  Backwashing every night for a few minutes replenishes the the air charge and removes the precipitated iron, manganese and sulfur, flushing it down the drain. Presently, we are offering it as a Combo system, meaning that it is followed by a Fusion water softener which polishes off any iron or manganese that may have slipped through, and removes the hardness from the water.  The water quality will be amazing!  The water will be slightly "oxygenated"  which mean you may see air bubbles in the water, but that is good, not detrimental. Presently, we rate it at 10 PPM of iron removal and 7 PPM of sulfur removal, but with the addition of a hydrogen peroxide feed ONLY DURING REGENERATION, we can double the removal to 20 PPM of iron and 14 PPM of sulfur.  This is robust, heavy-duty system, with commercial-grade controls and capacitor backup for time. You can see the inFusion HERE.
November 23, 2011
Comments
Gary Davis
Hi; In your article you state the inFusion filter only uses hydrogen peroxide during backwashing, but the linked info states it is a continuous feed system. Could you clear this up?
Reply
Mark Timmons
We no longer use the inFusion. The Fusion OXI-GEN system uses it continiously. This product was discontinued as it creates lots of iron sludge in the valve that has to be cleaned frequently... plus the injectors get plugged. With the OXi-GEN system this does not happen.
Reply
Search The Blog
Categories
TOP SELLING PRODUCTS
TOP SELLING PRODUCTS